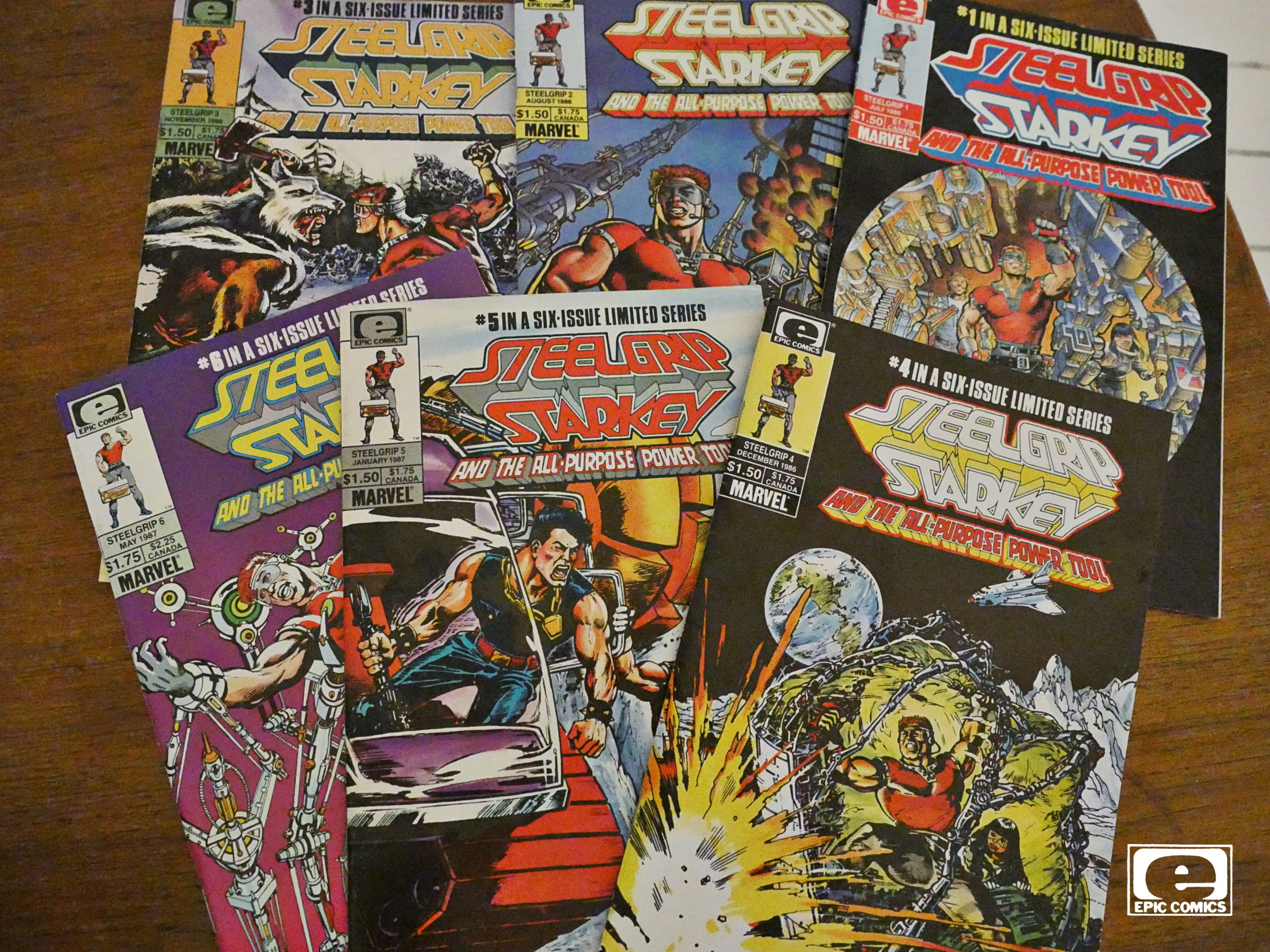 I think you can probably say that the air was slowly going out of the Epic Comics balloon by now. In 1986, only two new series had their debuts, and both of them were limited series. Plenty of series started earlier did continue, though, so it’s not like they weren’t publishing anything, but it must have become clear to Marvel by now that Epic, in its current incarnation, wasn’t a commercially attractive thing. But for now, Epic is coasting without any major changes (except not starting many new projects). The next phase starts in 1988, I guess… 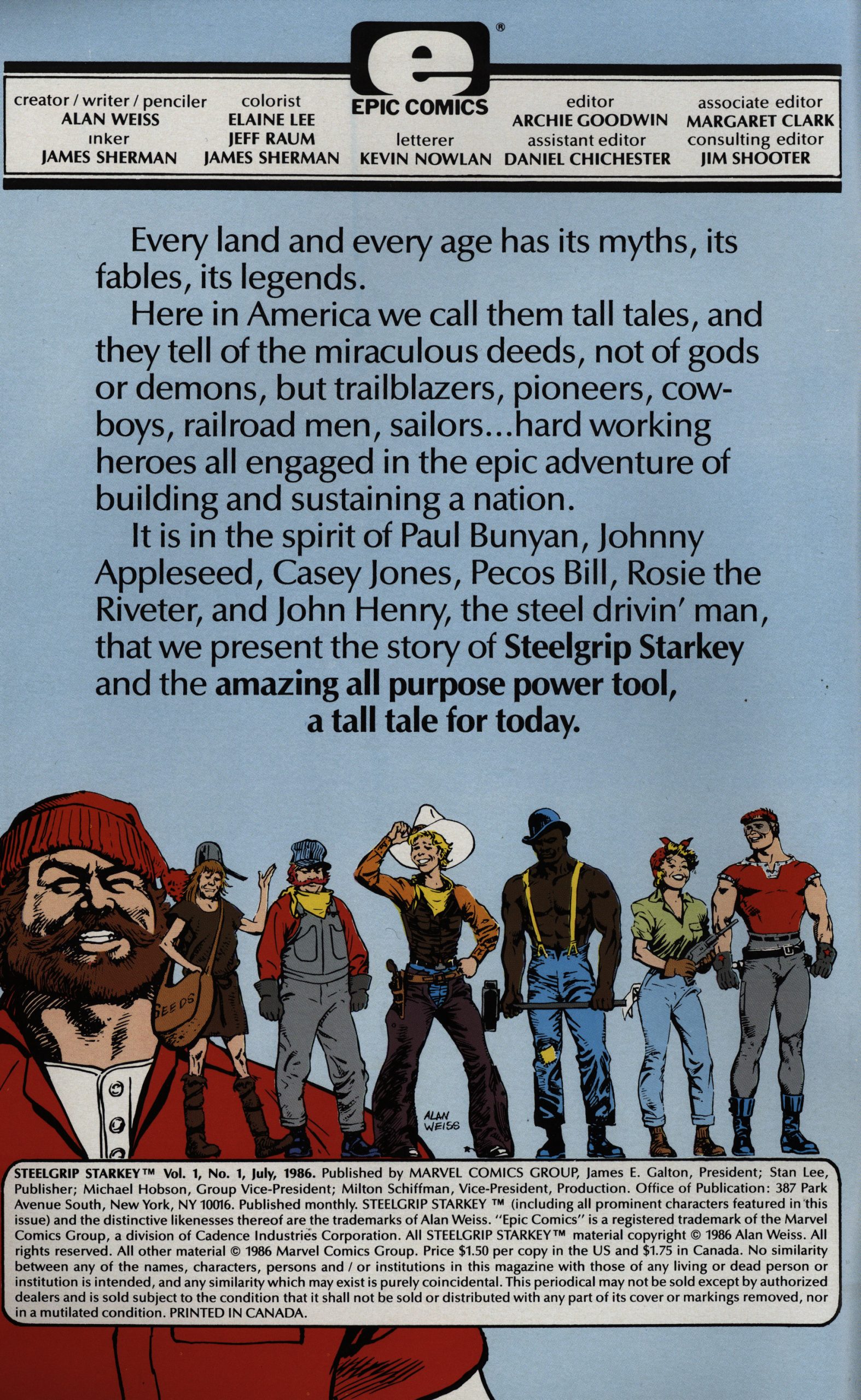 Anyway! This is a series I’ve never seen anybody talk about. I mean, I knew the name vaguely, but it’s not something that seemed to make much impact at the time. Let’s read the first three pages: 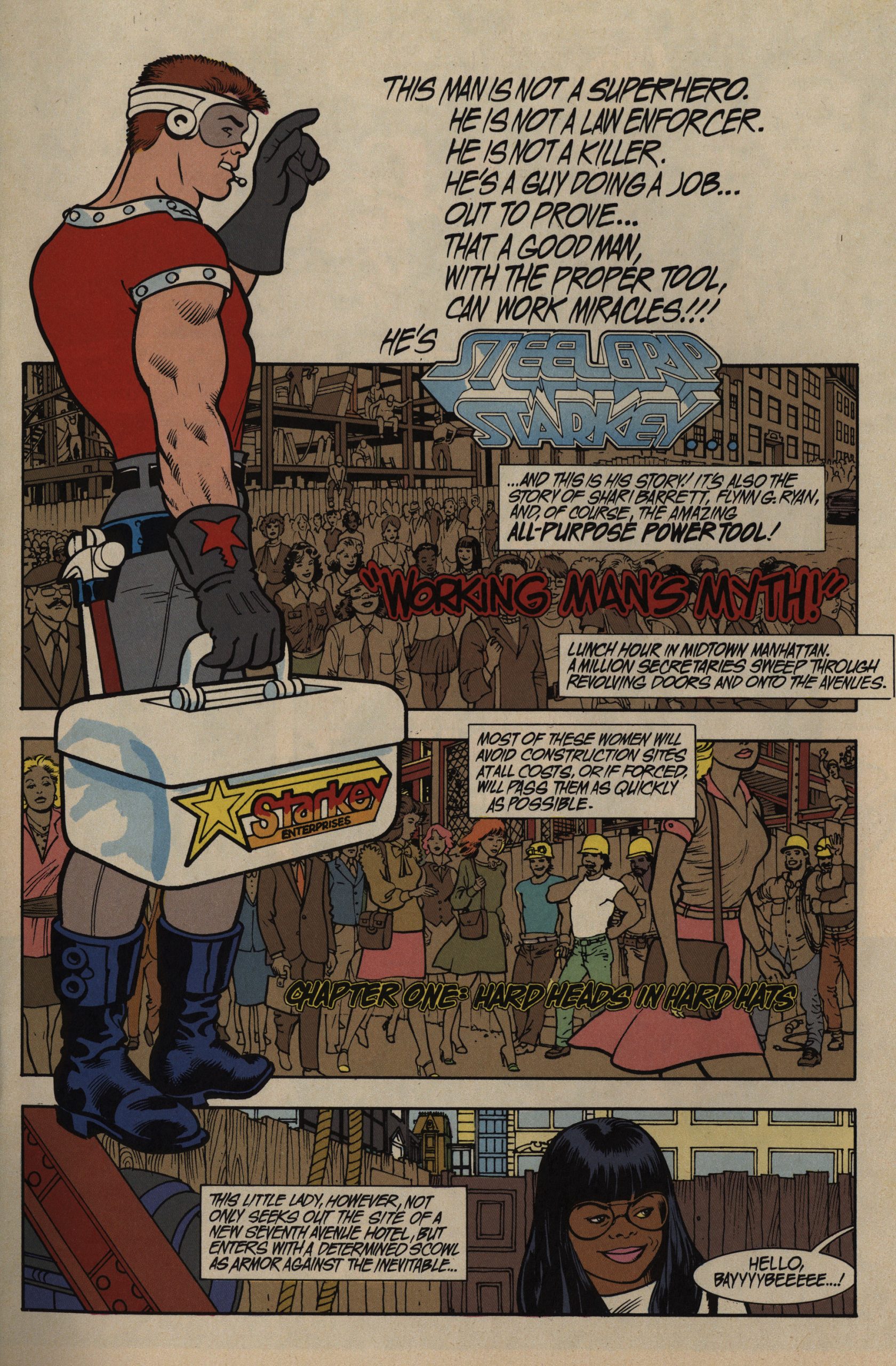 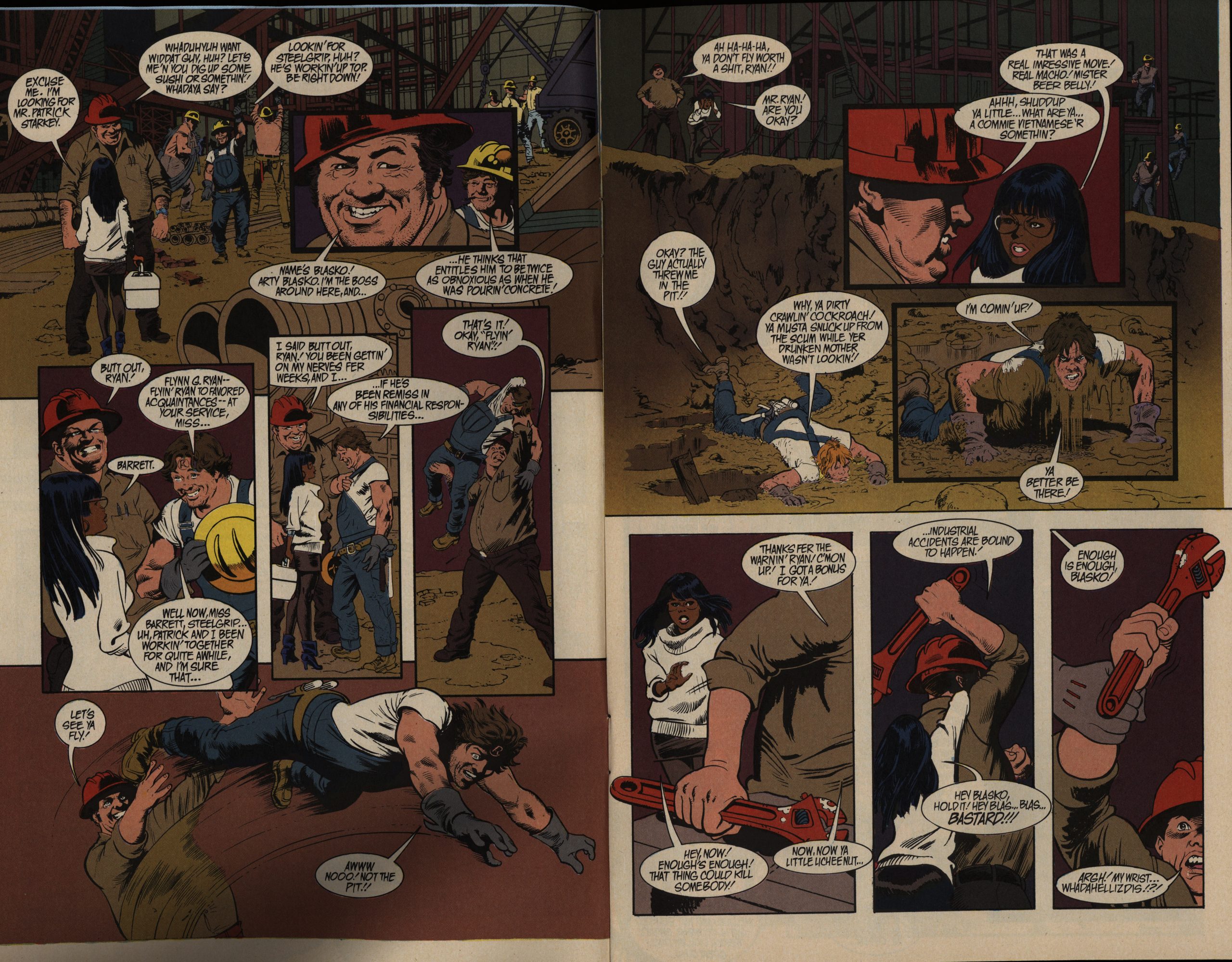 First of all, the artworks really quite attractive. Weiss (and inker James Sherman) have a kind of Neil Adams thing going on with super-dynamic layouts and exaggerated action, and the colouring (by Elaine Lee (and others)) is kinda spot on.

Secondly… I kinda assumed they were kidding with the references to working class stuff in the intro. But no: The hero(es) are working class, and on the first three pages we see confrontations with both sexual harassment and racism. 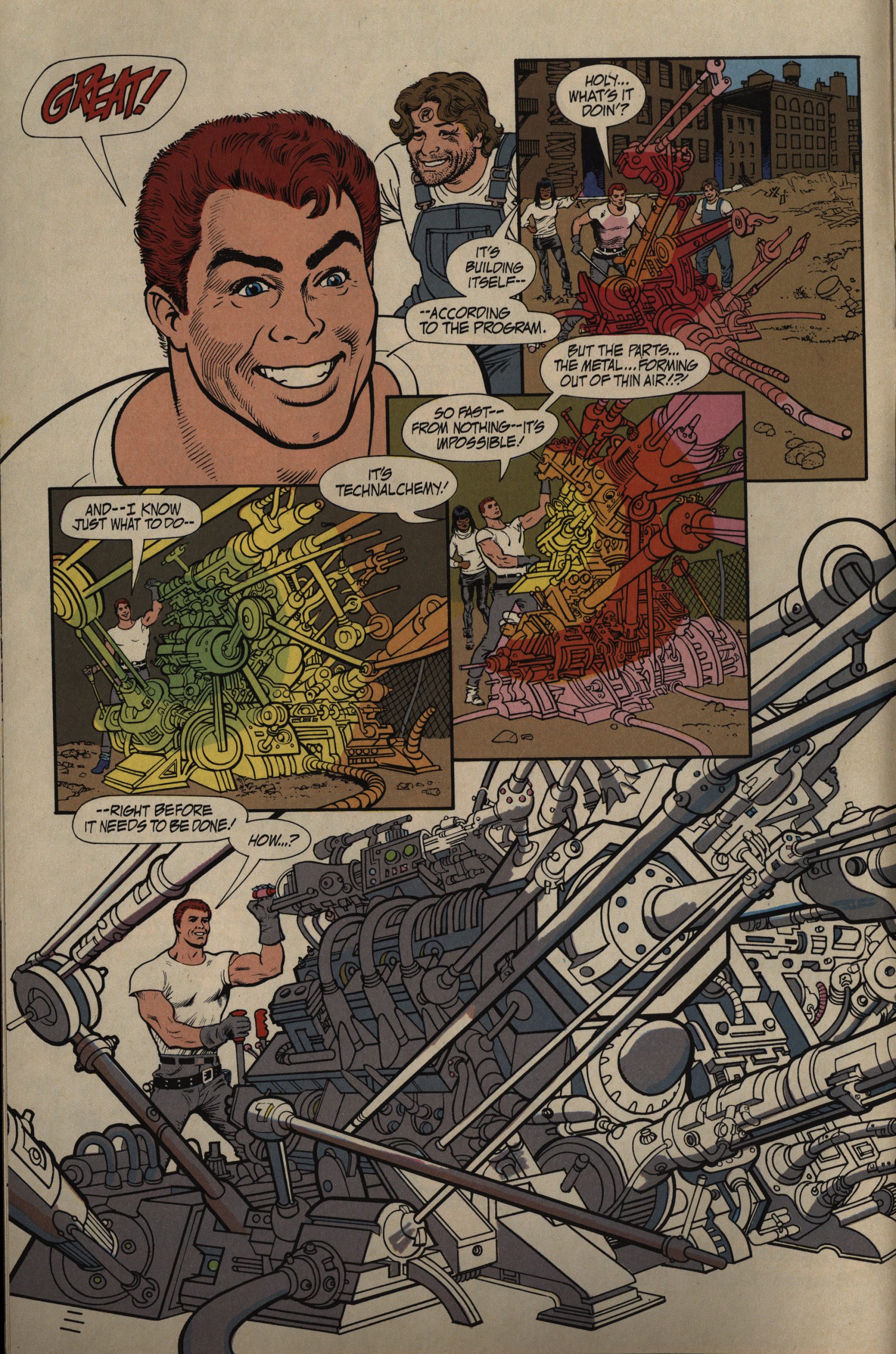 And then we get to what was presumably the point of this book: Drawing weird, weird machines. (The concept is that there’s a magical box that Steelgrip Starkey touches and then it kinda grows that way. No Subtext Detected.) 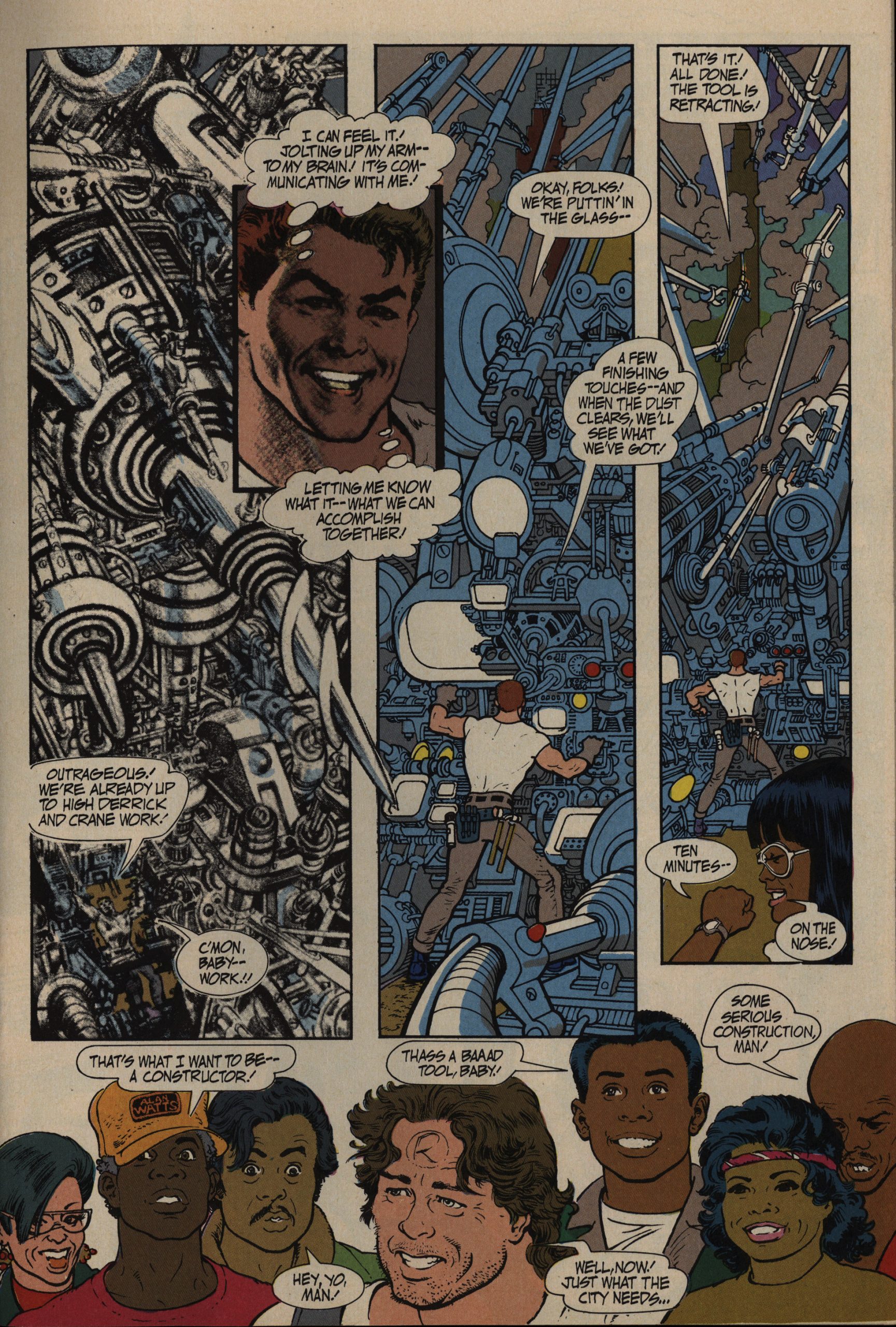 It’s just such a weird comic. In the first two issues, everything happens all the time: There’s no structure or much logic to anything. I think they have like four “adventures” during these first 64 pages? (Yes, every issue of this series has 32 story pages. It’s brim full.)

It’s like reading the fever fantasies of a twelve year old. It’s strangely compelling; you can only sit there and try to take it all in and fail completely. 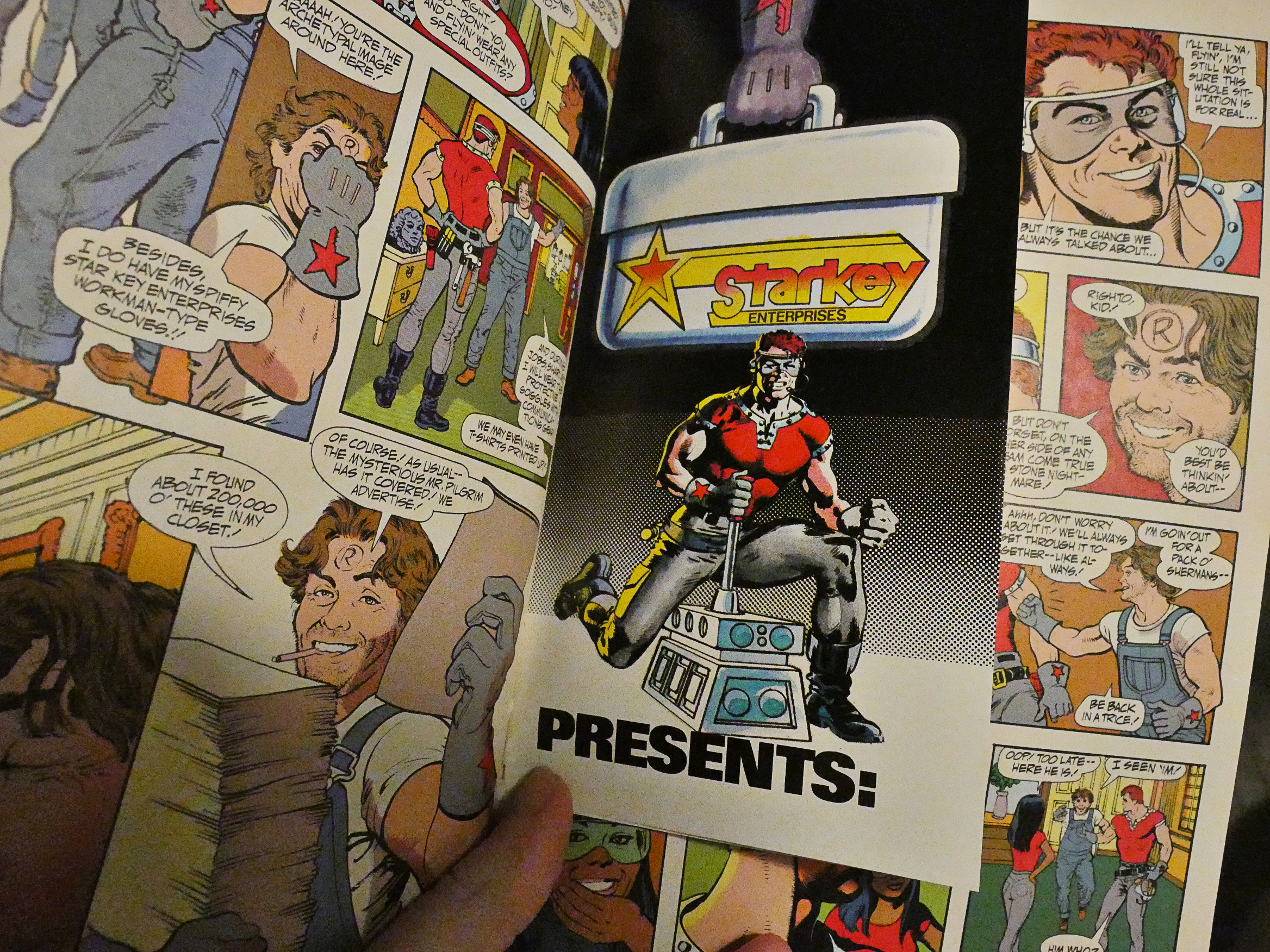 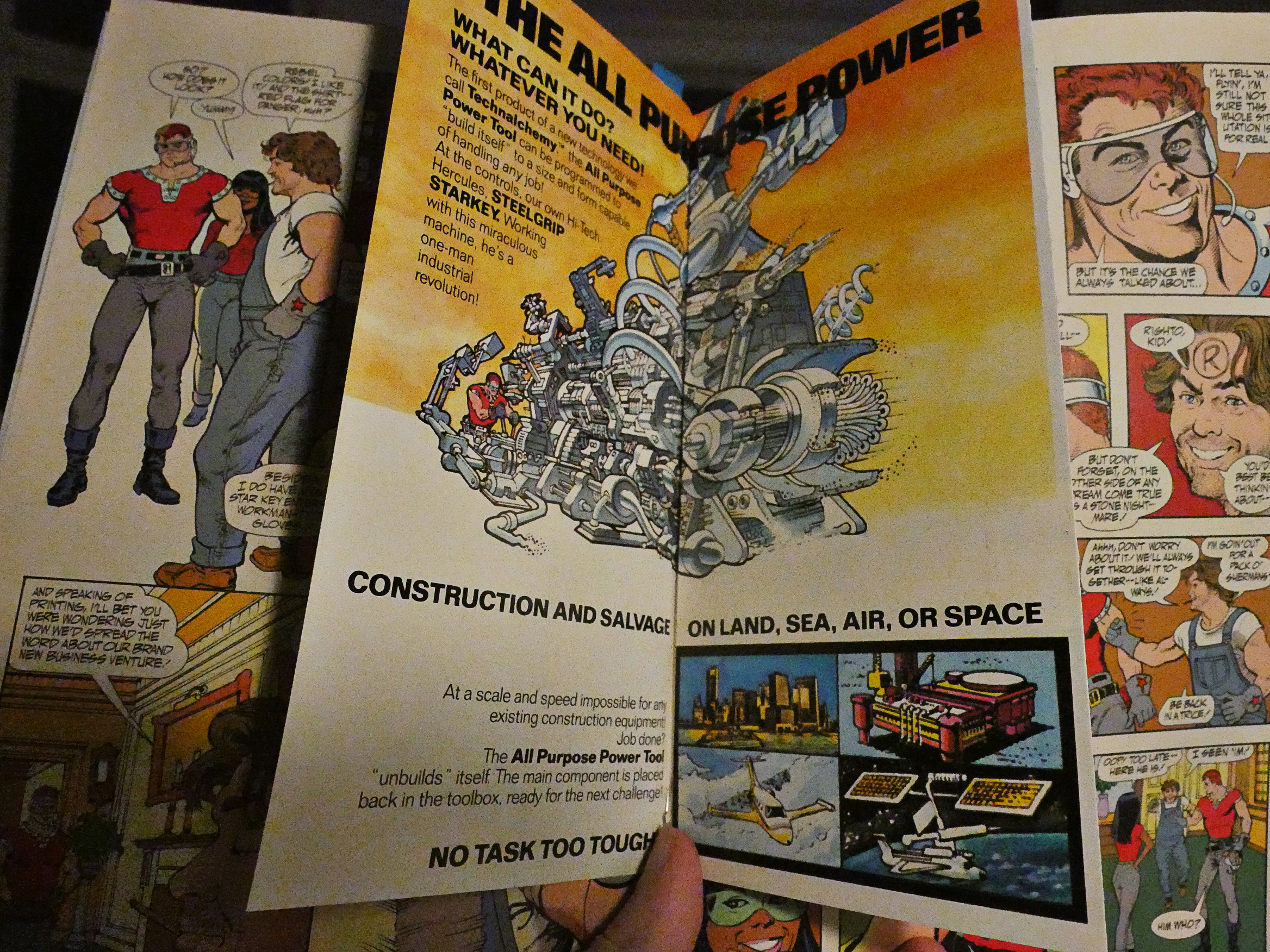 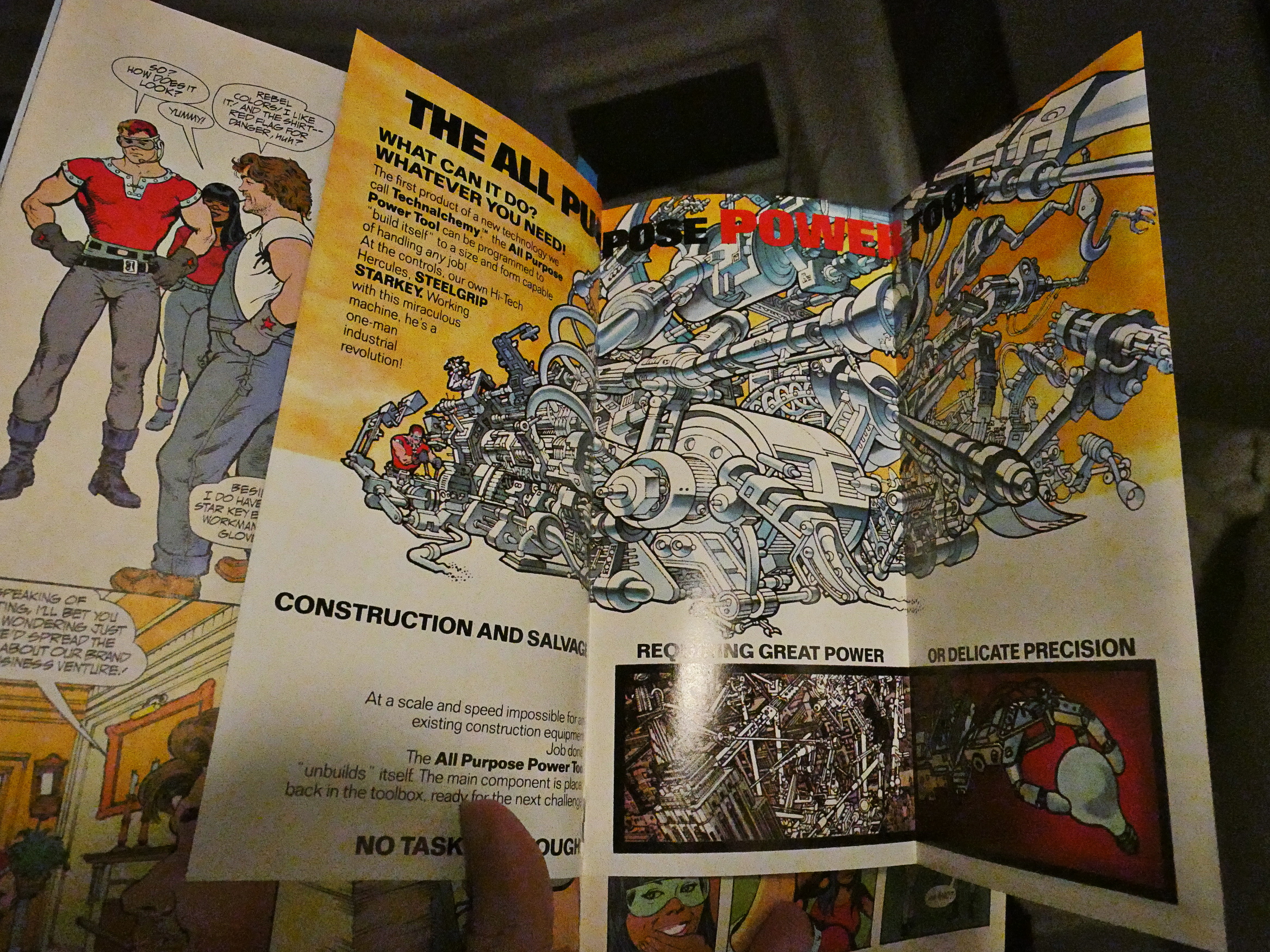 There’s a fold-out insert in the middle of the first issue, and I think this is the only time Epic did something like this (until the 90s). I wonder how Weiss persuaded them. 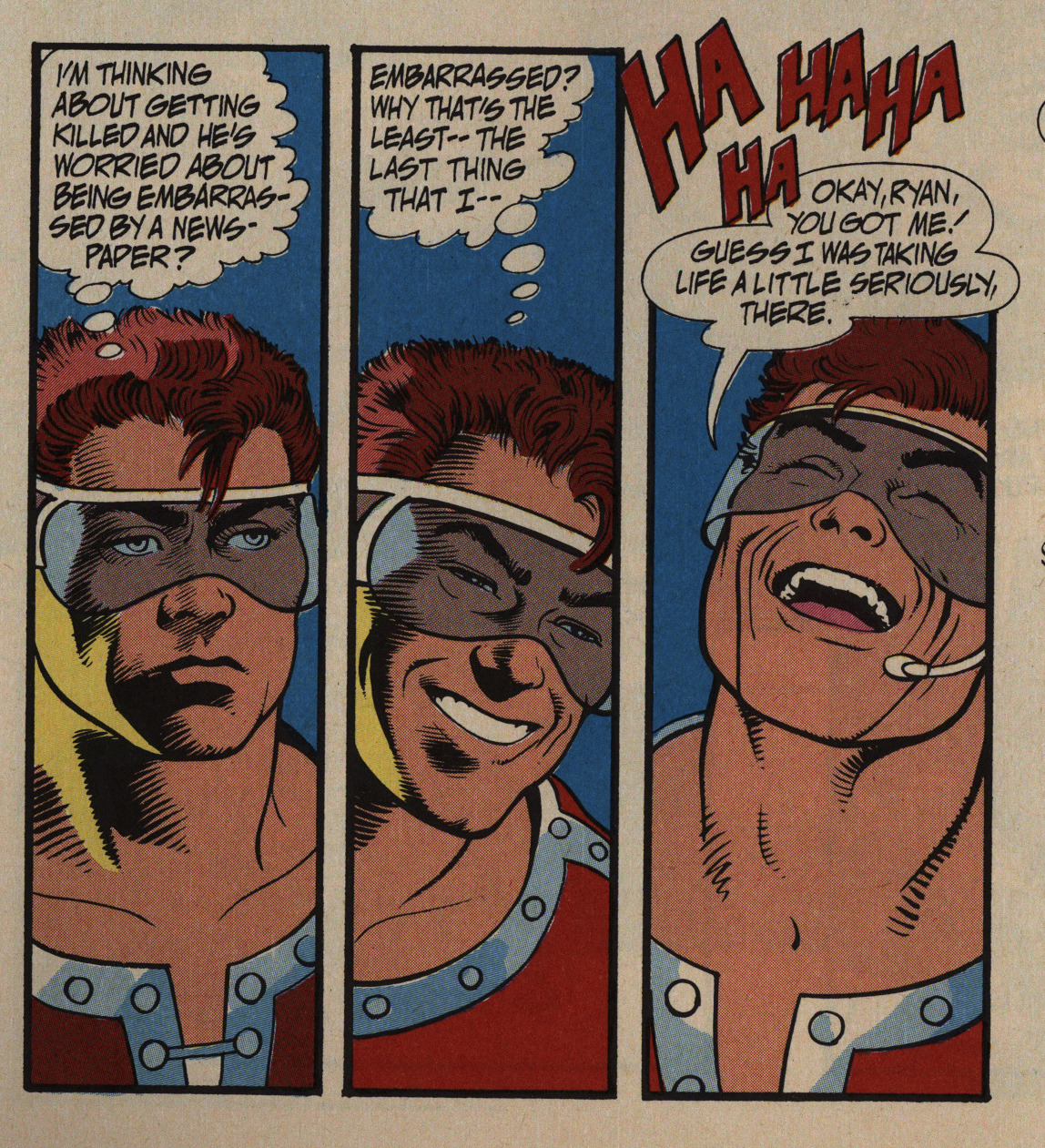 So in one of the “adventures” they’re saving the UN building, but terrorists are shooting at them, and Starkey says that he didn’t sign up to get shot at, so he was going home. This three panel sequence explains why he changed his mind.

I mean, in Weiss’ head, it explains everything. I assume. 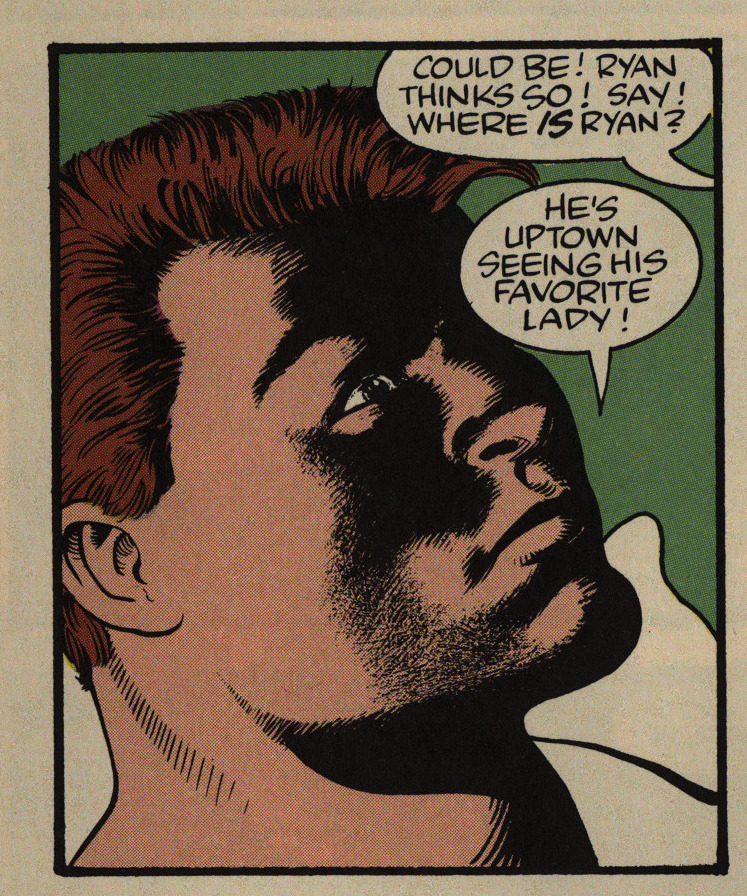 What is even Weiss doing here? Did he just have an extra photo reference that he wanted to use? 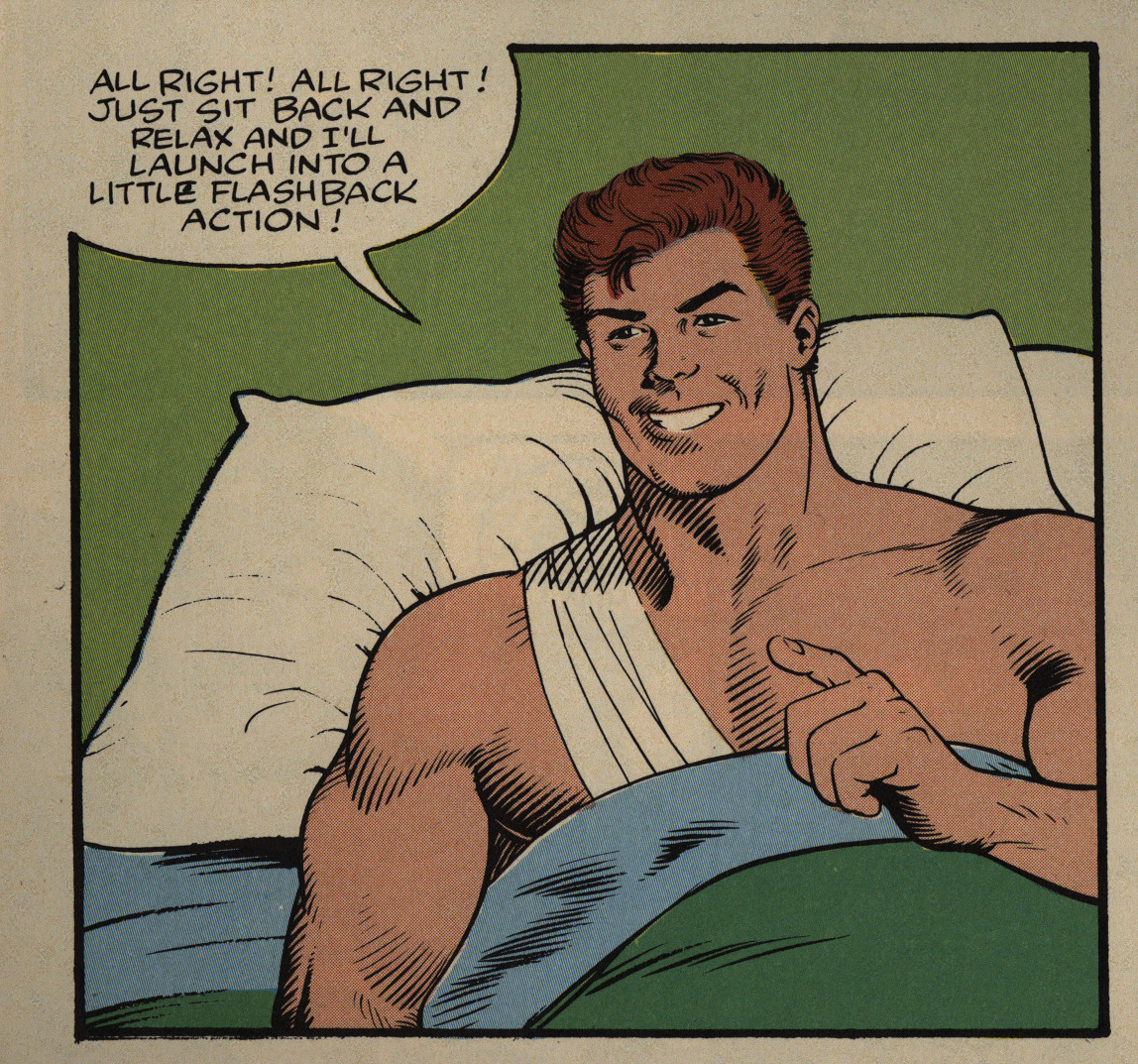 Except the action part. 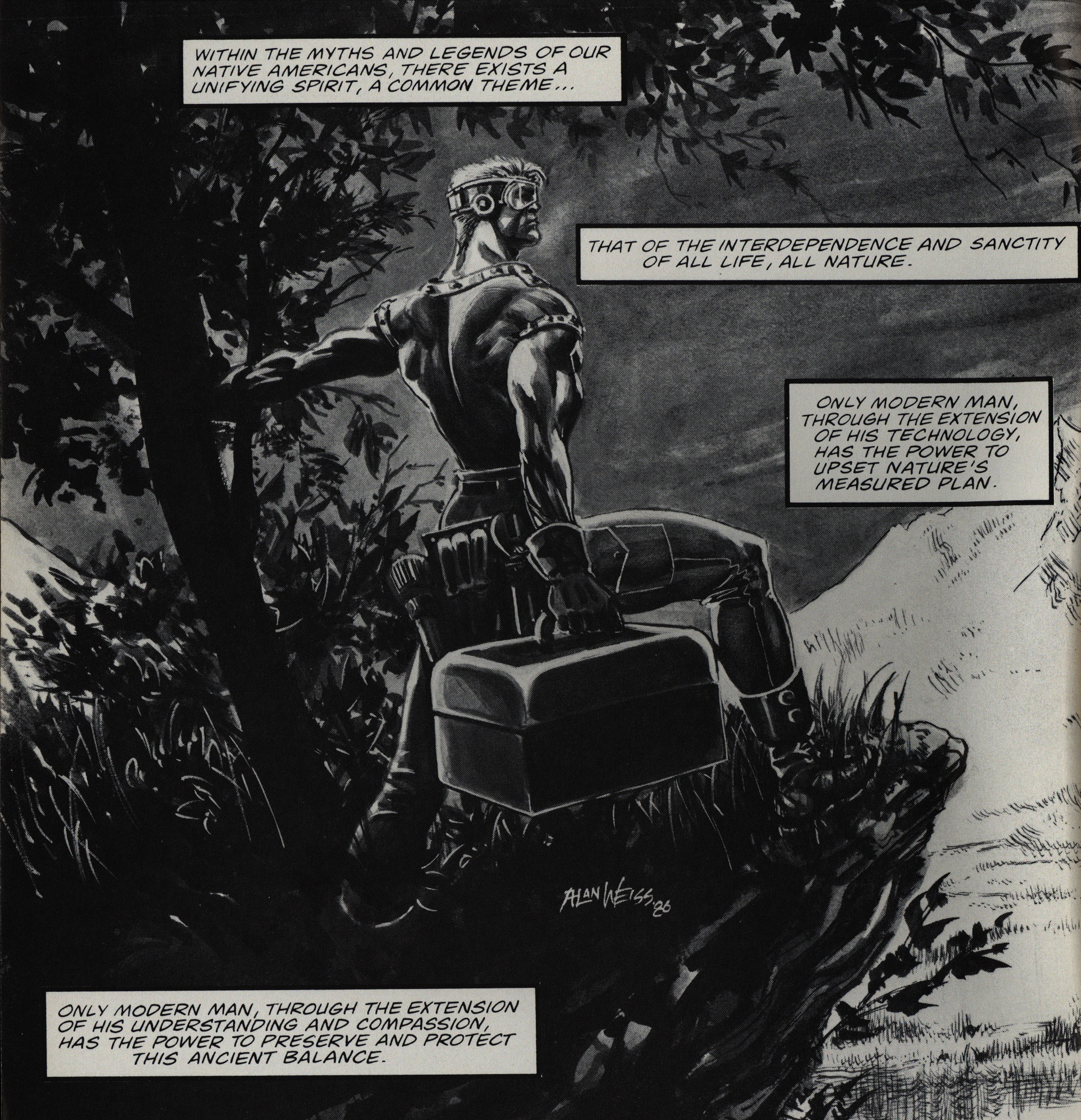 With the third issue (after a three month delay), inker Sherman takes over the artwork, but Weiss provides this very heroic stance on the inside front cover. 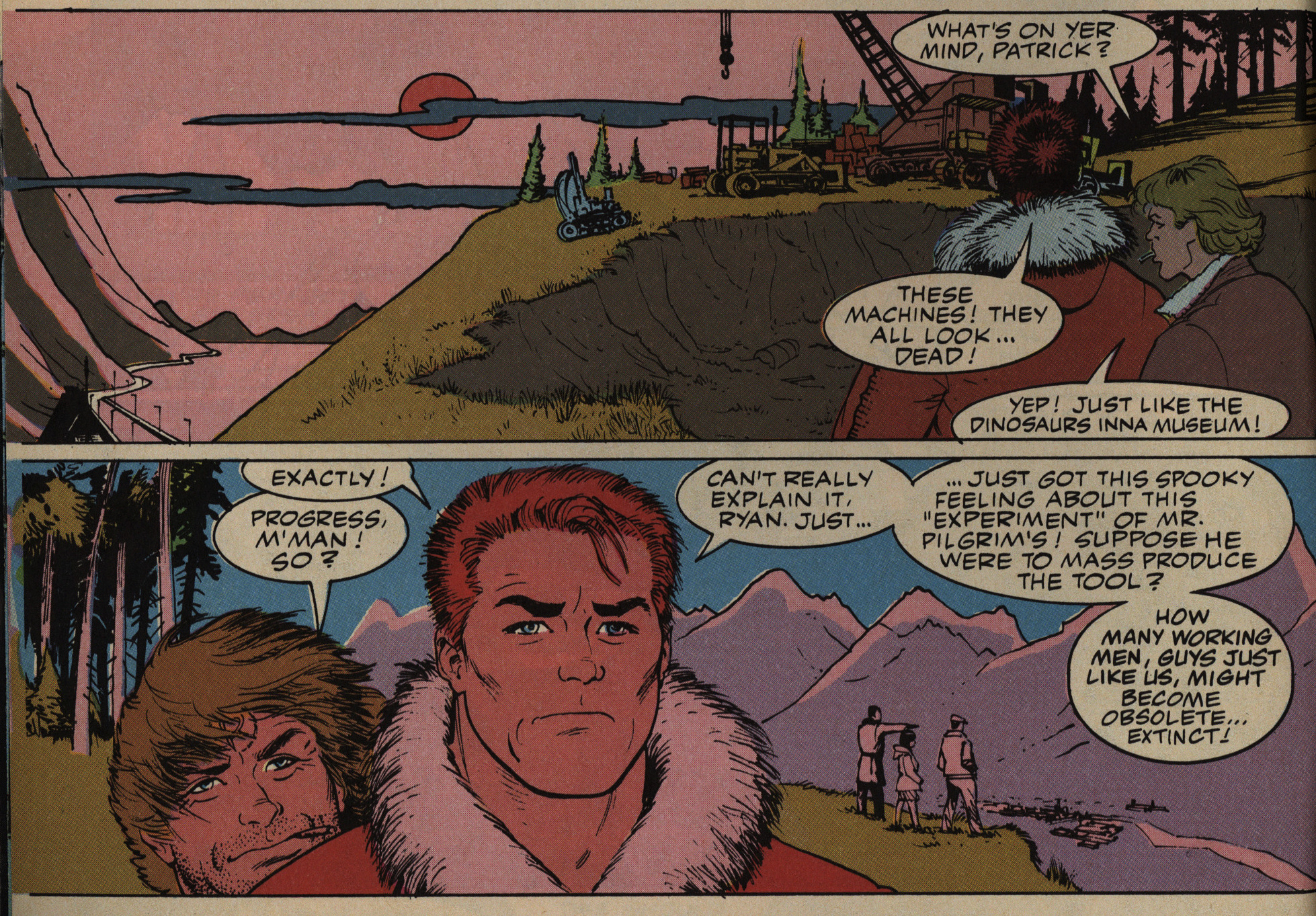 Steelgrip contemplates the socio-economic impact of the miracle tool. Once Weiss stops doing the pencils, the magic machine stops being a miasmatic vision and becomes more a… hodge-podge.

Sherman’s artwork’s fine, but it isn’t as compulsively odd as Weiss’. But that’s a nice torture trap death machine thing. Did they ever use that in any Saw movies? 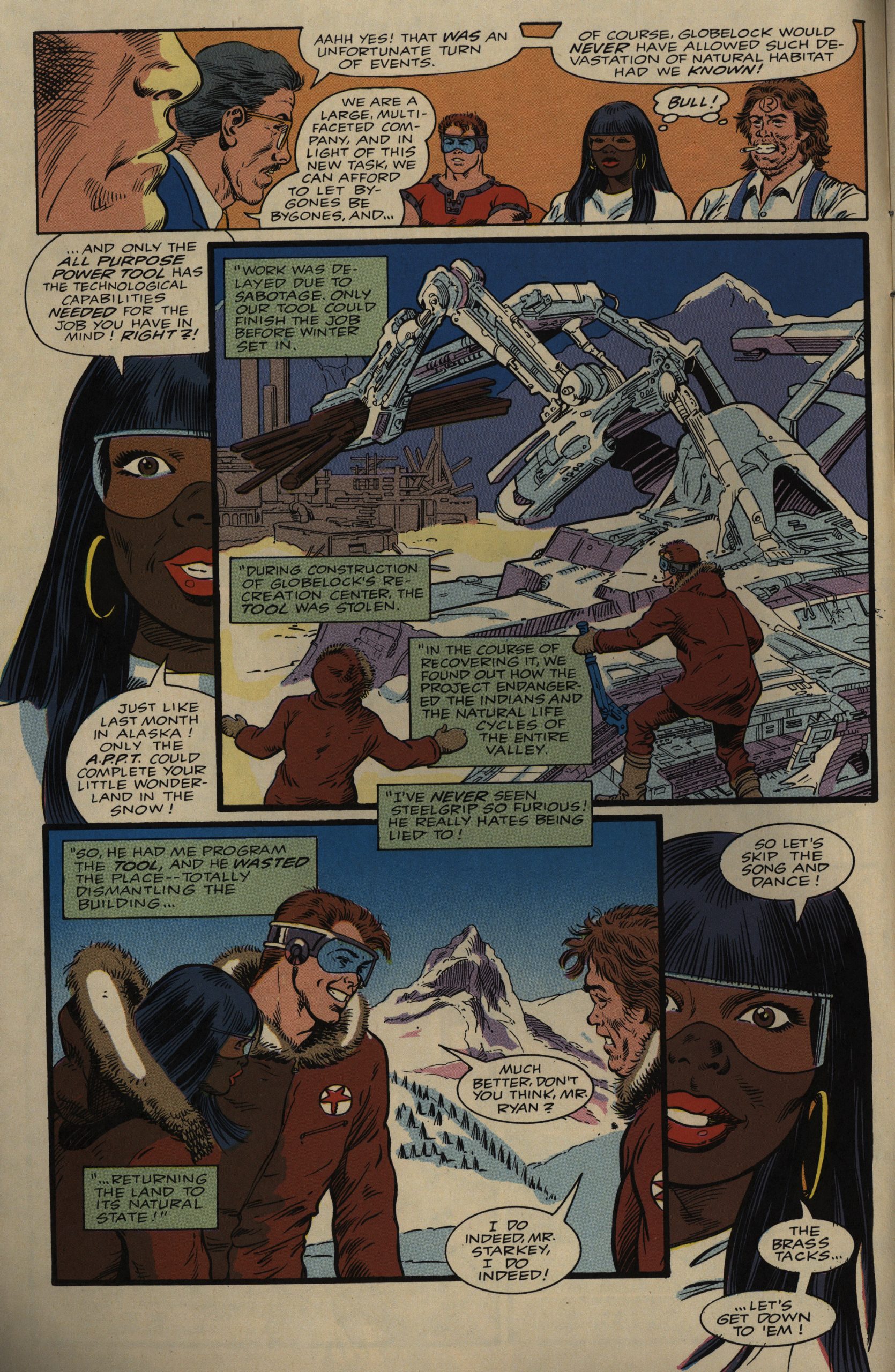 Val Mayerik then takes over and does two issues, and my guess is that Mayerik isn’t interested in machines at all, so he seems like a strange choice. He’s more organic and scratchy, and, indeed, the machine now looks almost normal. But scratchy.

Colourist Elaine Lee also leaves the book, meaning that all the original visual interest is gone. 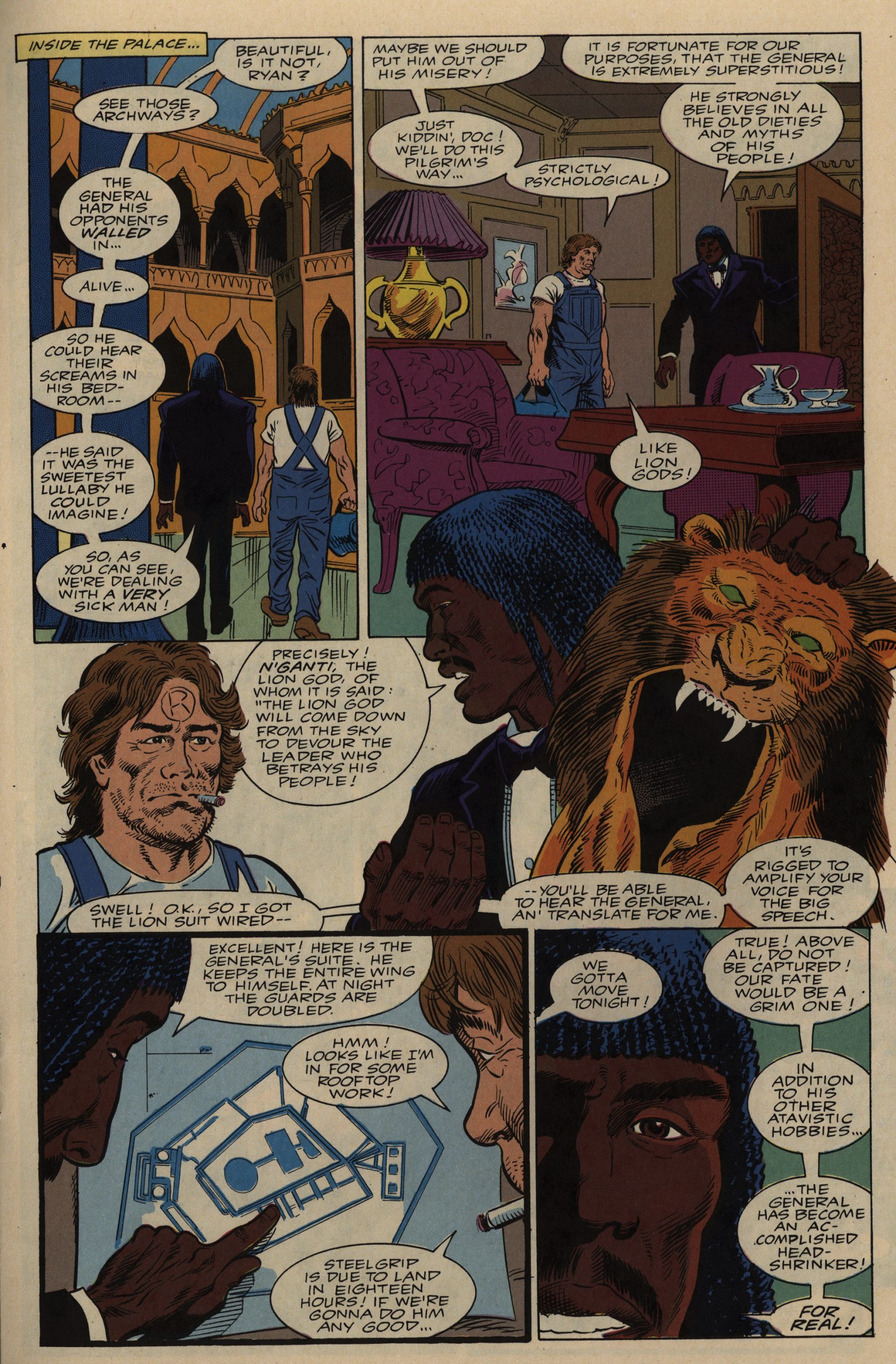 The storyline goes from inspired acid dream state to… nonsense? There’s a difference. In this issue, the plot is that an African president has mined the Moon (!) because of… reasons… and they get the plot out of him by dressing up in a lion skin.

Besides being kinda on the racist side, it just doesn’t like work? 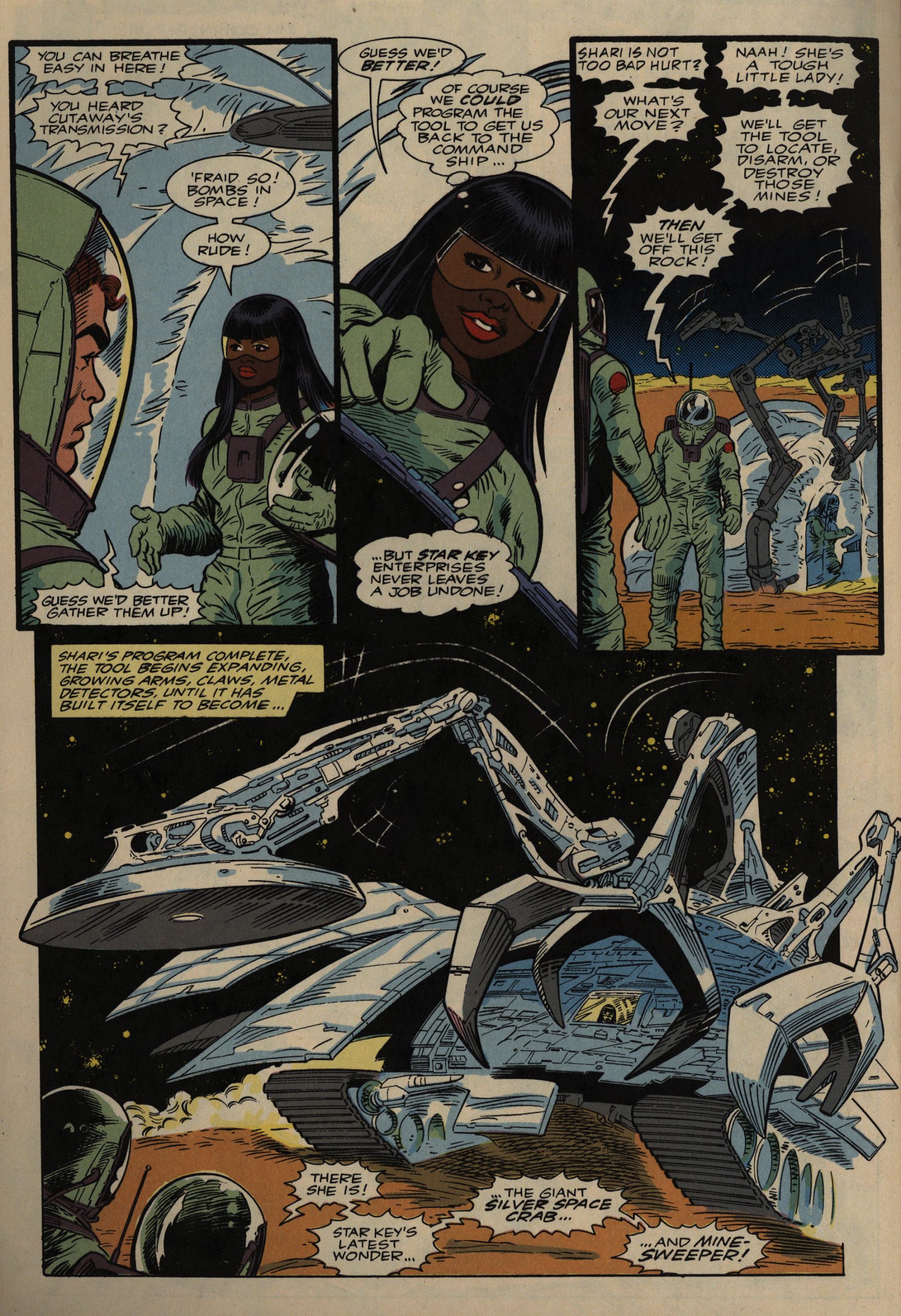 Yes. You have to defuse the mines on the Moon, otherwise, er, uhm… There an issue where they compete with these guys about who can build the most, fastest. I admire the Carl Barksian conceit, but at this point I just have to say: WTF? On the other hand, as part of the competition, they move an entire forest out of the way of acid rain. You can’t quibble with that. After a four month delay, we get the final issue, and Weiss is back on pencils, but without Stanley on inks. And then it’s over. Oh, right, that drawing of John Henry originally ran like this: I can see why they’d want to correct that.

Well, that’s a weird, weird book. The first two issues were oddly compelling, and the remaining four were something of a chore to get through. The series has never been compiled and reprinted, and for somewhat obvious reasons. (And it’s the only Epic series of its vintage that doesn’t have its own Wikipedia page.) But it’s a shame, because it’s a comic like no other.

Like I said at the start, this series didn’t get much attention at the time. In Amazing Heroes, I found a mention in the letters column (Amazing Heroes #109, page 75)

I buy only DC’s
Who’s Who and of Marvel, mostly
Marvel Age. Steelgrip Starkey seems
very promising, though issue #3 was
two months late. It’s well-drawn, clean-
ly written, with characters that are
characters, and suffers only from the
sheer momentum of issue 1 which can-
not be sustained for the rest of the
series. Already issue #3 slowed the
pace for human soul exploration of
what things mean for Steelgrip.

MacDONALD: Is there any kind of basic
philosophy behind the Epic line?
GOODWIN: This is a question 1 always
get asked on panels at comic-book conven-
tions. And all the other alternative pub-
lishers always seem to have nice sensible
answers. don’t know. hear philosophy,
and I think of Machiavelli and things like
that. Basically, What try to do is not pin
it down to Epic Comics being one certain
thing. What I sort of consciously try to do
is not duplicate the same kind of product
that Marvel Comics is already doing. I
definitely sort Of Stay away from super-
heroes.

MacDONALD: You often come up with
something like Steelgrip Starkey.
GOODWIN: Yeah; Starkey and
His Incredible Too!. That’s written
and drawn by Alan Weiss, and inked by
Jim Sherman. However, at the moment,
that’s sort of on hold, because Alan’s been
having scheduling problems.
MacDONALD: Certainly, there’s a dif.
ferent look to a lot of the Epic titles. There’s
been a little bit of talk about the “post•
Adams” period in comics.’ Would you call
nuny of books post-Adams comics?
GOODWIN: No, I don’t think I’d ever
call them that. You know, how can it he
post-Adams? He’s still working. Not as fast
Alan is on Steelgrip Starkey, but he’s still
working. I’m not sure what you mean
exactly by “post-Adams.” DO you mean,
no longer influenced by Neal?
MacDONALD: Let me put it this way.
There was a period when Neal Adams
the 100k in comics, but that passes as all Other
looks pass.
GOODWIN: sure, just as Jack Kirby.
Gee, I don’t know if I’d actually think of it
as a particular period or anything. I cer-
tainly would not turn away a book be-
cause it looked like Neal Adams.

Geez, OCR, man. Anyway, I liked the phrasing “something like Steelgrip Starkey”. Because it is totally like something that Epic would publish at this time: Hopelessly odd. And the post-Adams thing I get.

And that’s it for contemporaneous mentions.

Here’s a recentish mention, though:

For all its attempts to appeal to blue-collar readers and to the American tradition of building stuff (the John Henry myth is cited on numerous occasions), Steelgrip Starkey starts with a ludicrous premise that just gets goofier over the course of six issues.

And that’s all I could find. Lost in the mists of time.

One thought on “1986: Steelgrip Starkey and the All-Purpose Power Tool”