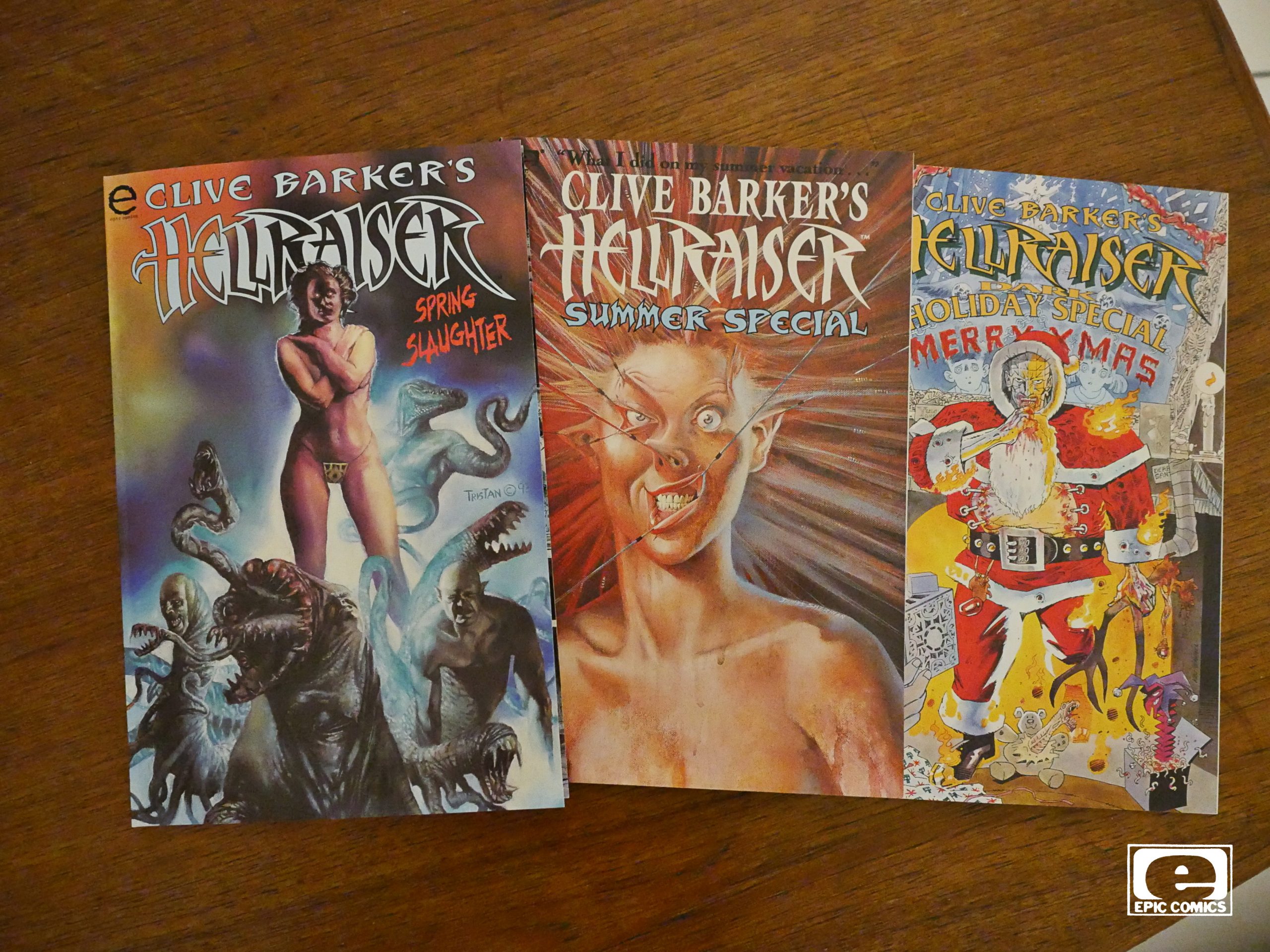 The flood of Barker-based product keeps on comic from Epic. It’s mostly been pretty dire stuff up until now, so I’m not really looking forward to reading these specials. But perhaps these will be spiffy? I mean, it’s possible. 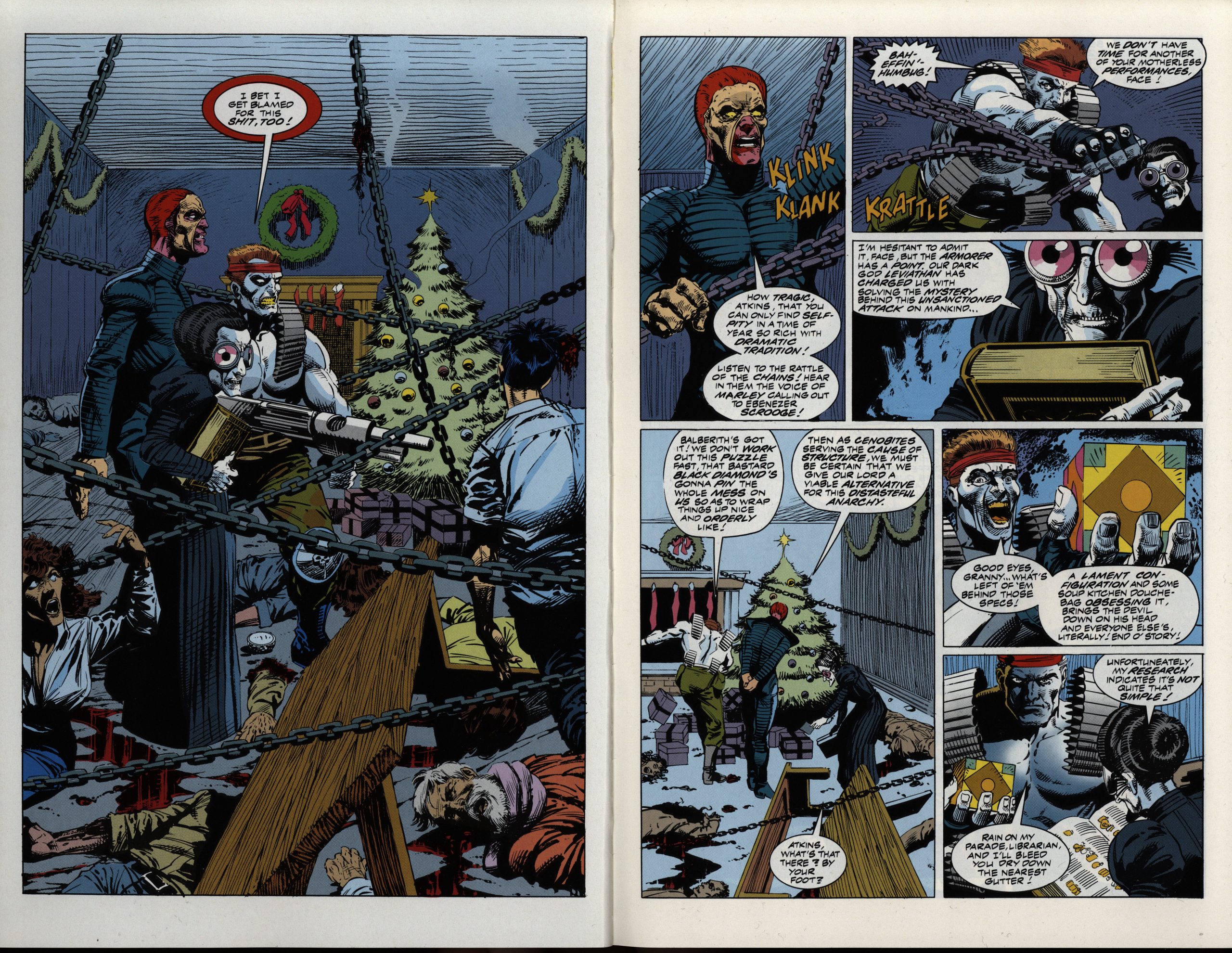 The first two are anthologies much like the normal “Hellraiser” series, which makes you wonder what’s the point… There isn’t really much here to suggest that they weren’t solicited for the main anthology, either: The stories in the Xmas special don’t concern Xmas, and the summer anthology stories have nothing to do with summer, in particular.

But they do both have frame stories (written by D G Chichester) that kinda fulfil the remit.

So in the Xmas special, we get to rejoin the three lamest Cenobites ever (introduced in the regular series) investigating… unlawful… incursions from hell. 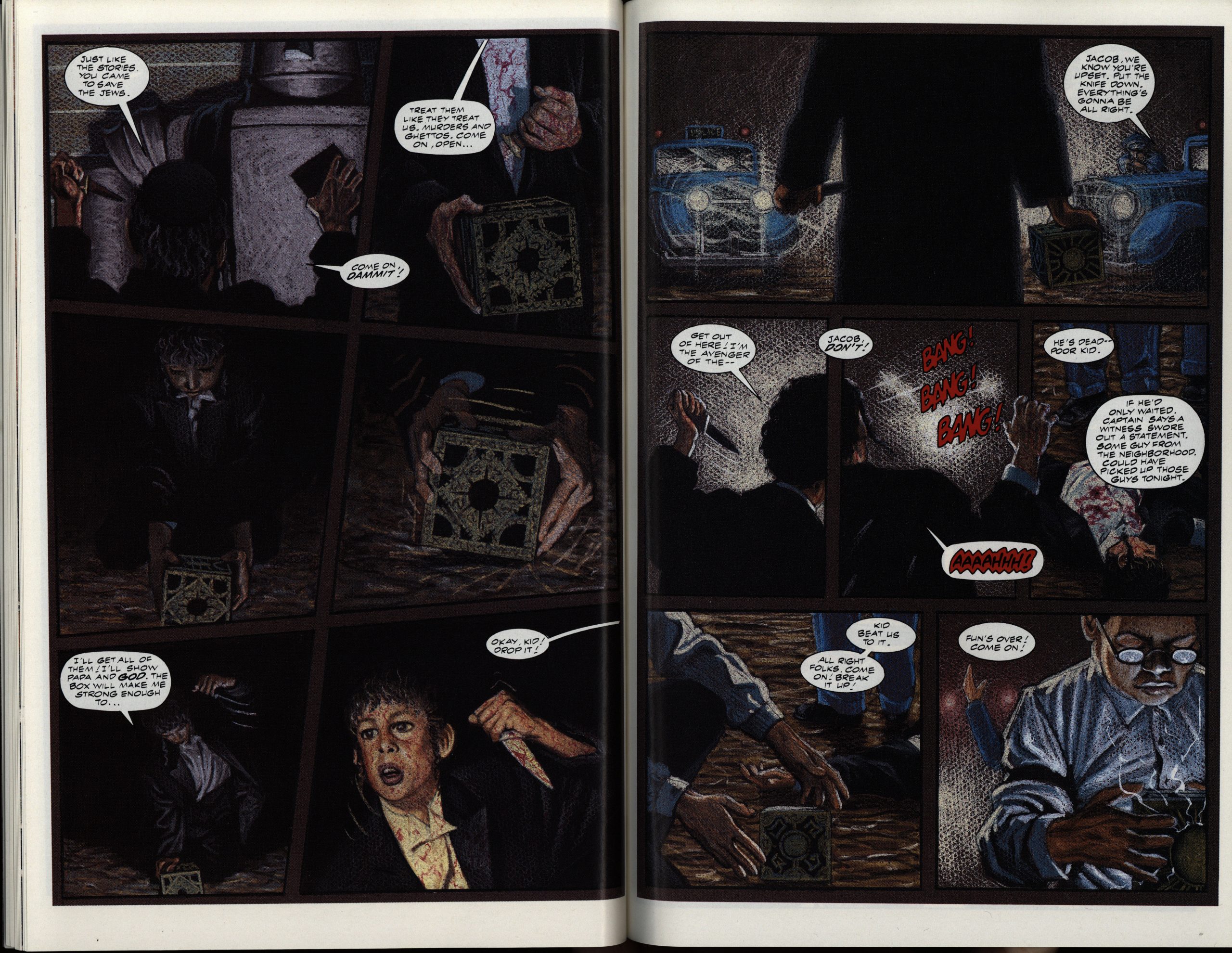 Tim Conrad’s artwork’s always fun to look at, but the story by Ben Schwartz doesn’t really seem to make much sense. 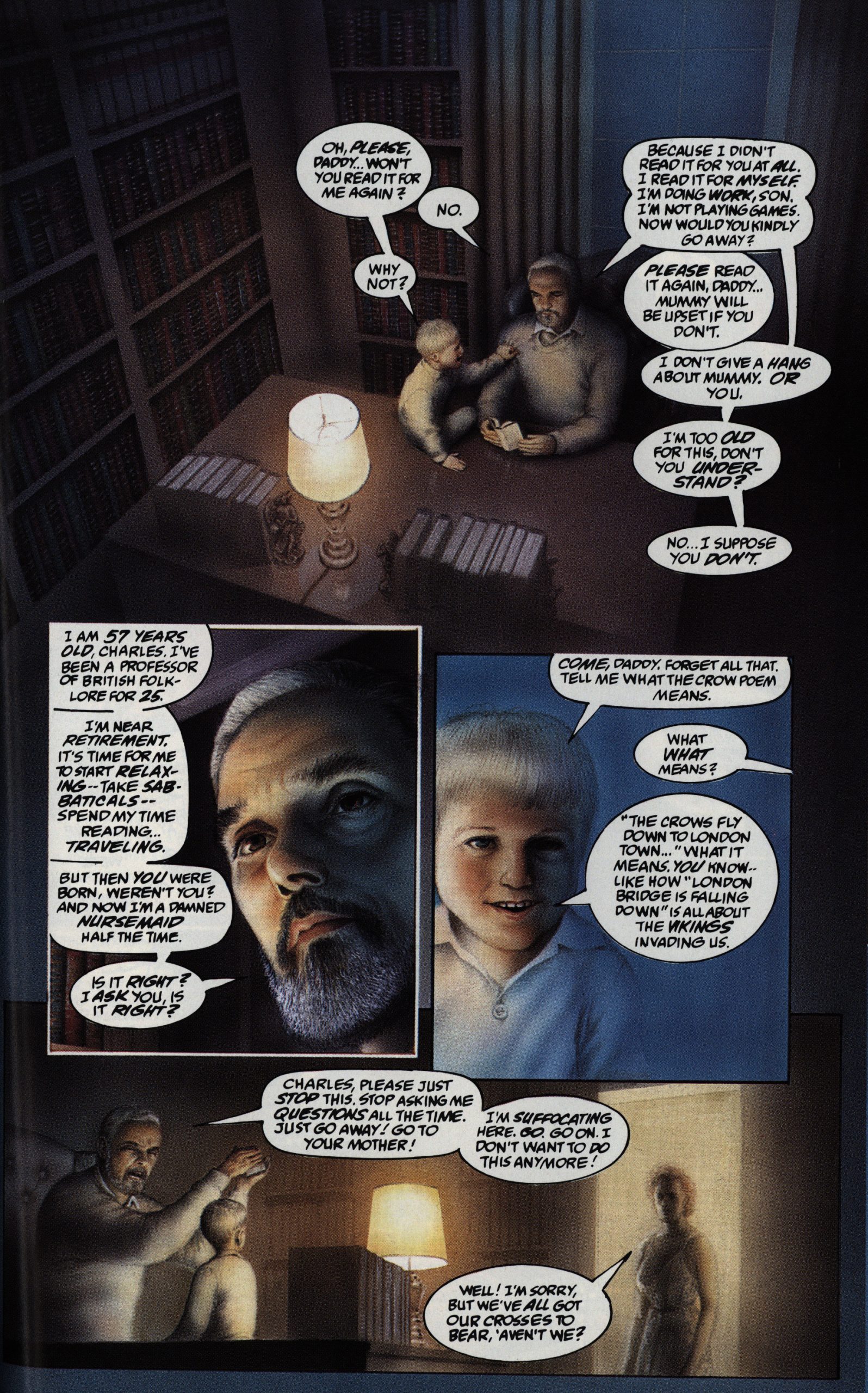 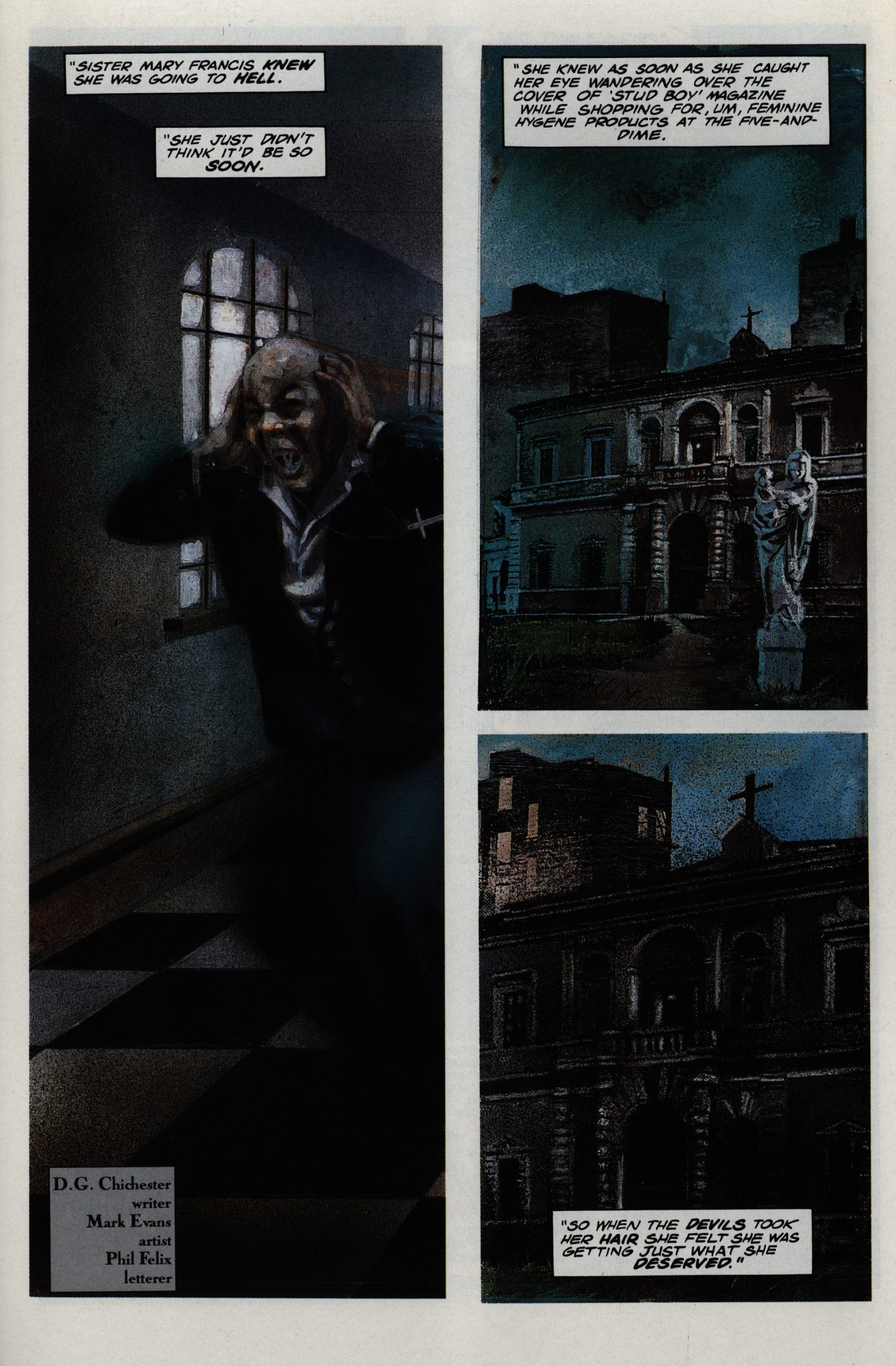 The summer special’s frame story is about a teacher getting her head set on fire, and another teacher sleuthing how that happened, so it continues the device from the Xmas special. (Or was the Xmas one done before the Summer one? That sounds more likely, really.) 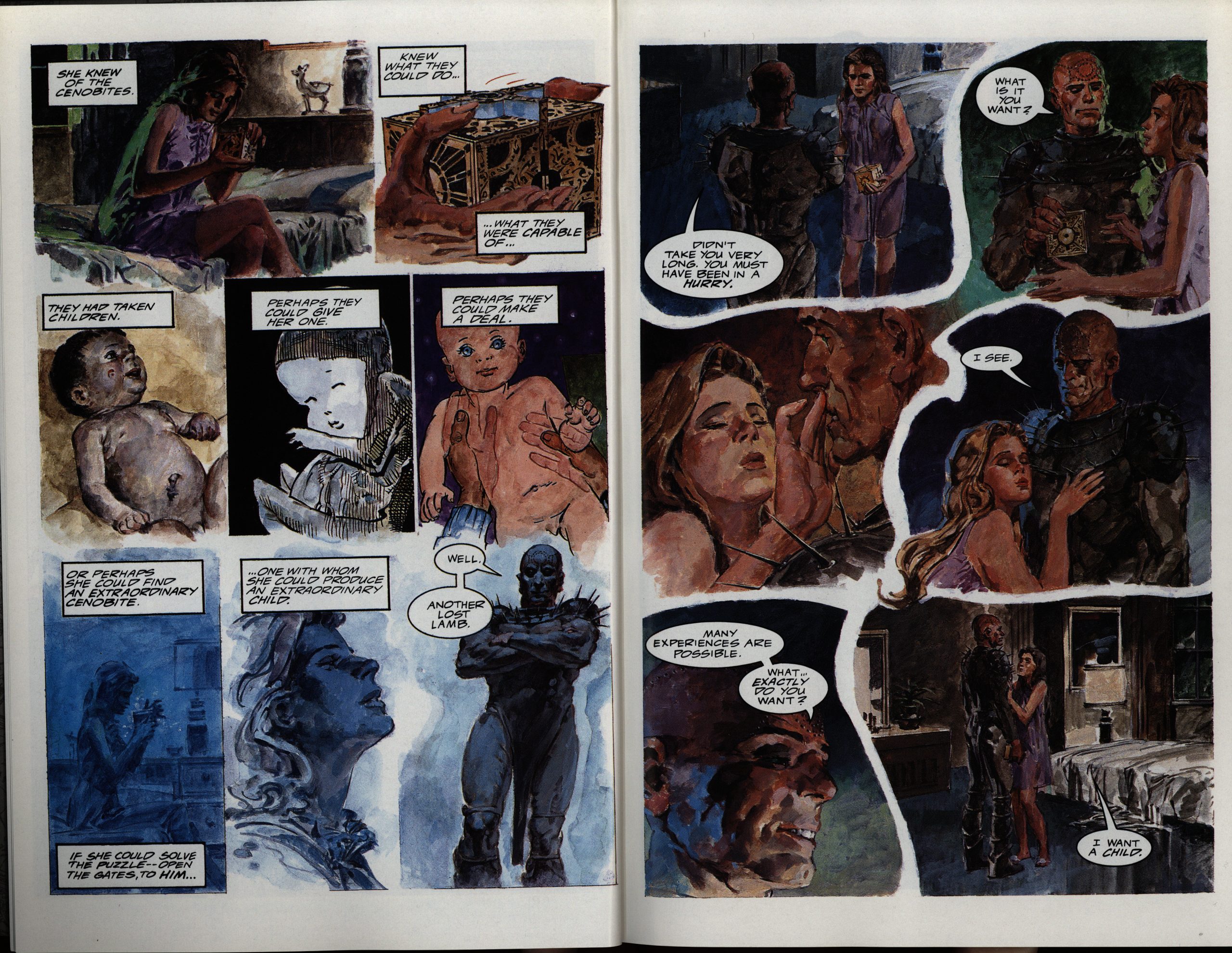 The summer special is longer at 64 pages, and has stories that are … more. Faye Perozich writes a really disgusting little ditty, but the genre is really difficult to do much in: Somebody calls a Cenobite to Earth, and then they are tortured endlessly. The end. And that’s the least inspired Cenobite I’ve seen. 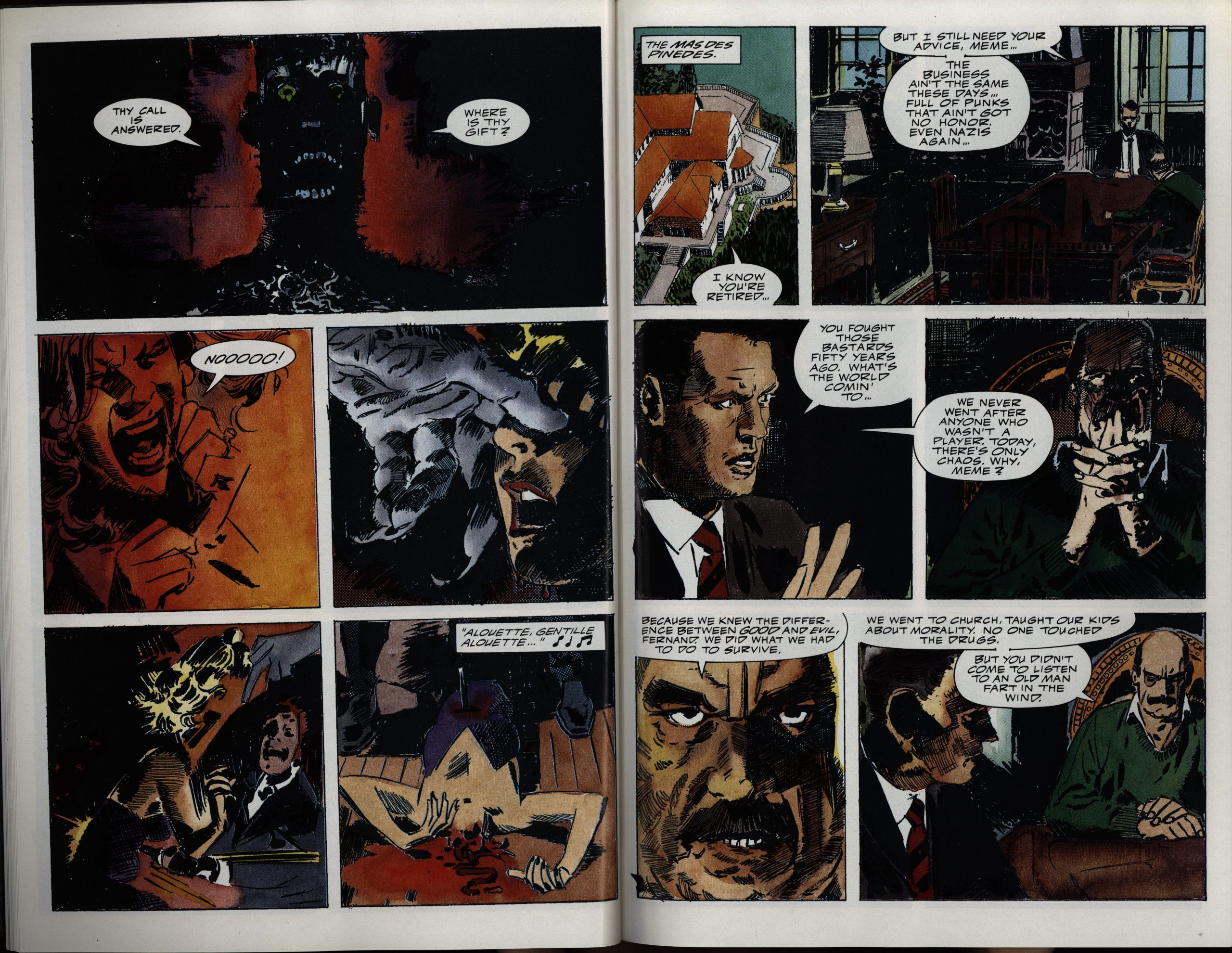 I’m a fan of Jorge Zaffino’s artwork, but it seems pretty phoned in here. I do really like the depiction of that Cenobite; just a dark force in the shadows. However, that’s kinda like the anti-Barker ethos: Barker was all about proving that all sawhorse about “it’s more scary if you can’t see it” wrong. Barker would show everything, all the time. Grind your nose in it. The story, by RJM Lofficier, is the longest in the book, and it makes no sense, whatsoever, within the established rules of the Hellraiser universe. But it’s readable, at least. 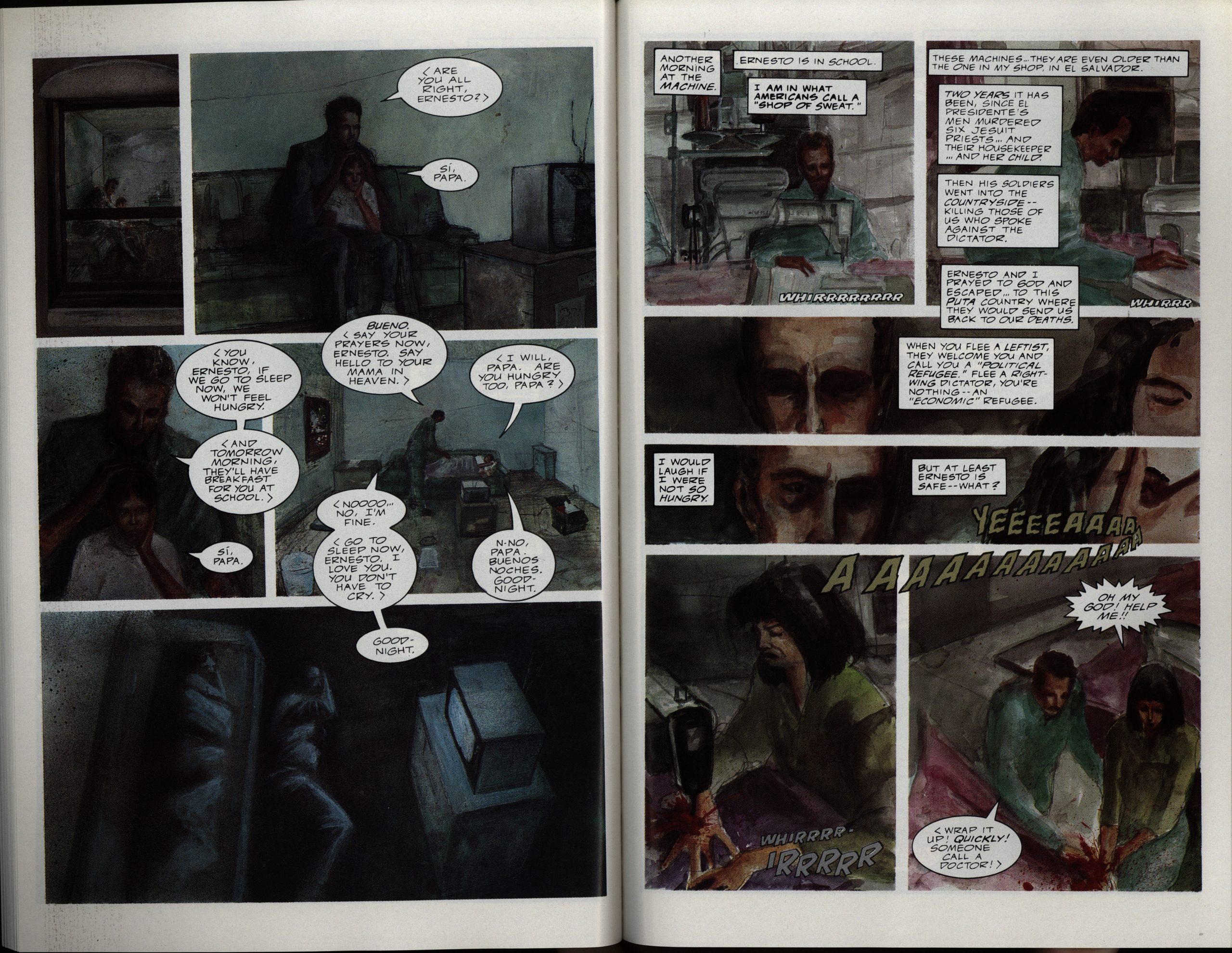 Frank Lovece and Bill Koeb does the best story of the book, and probably the best one in the entire Hellraiser series from Epic. Dark, moody, mysterious, gruesome, and… it makes sense! That’s the real shocker here. 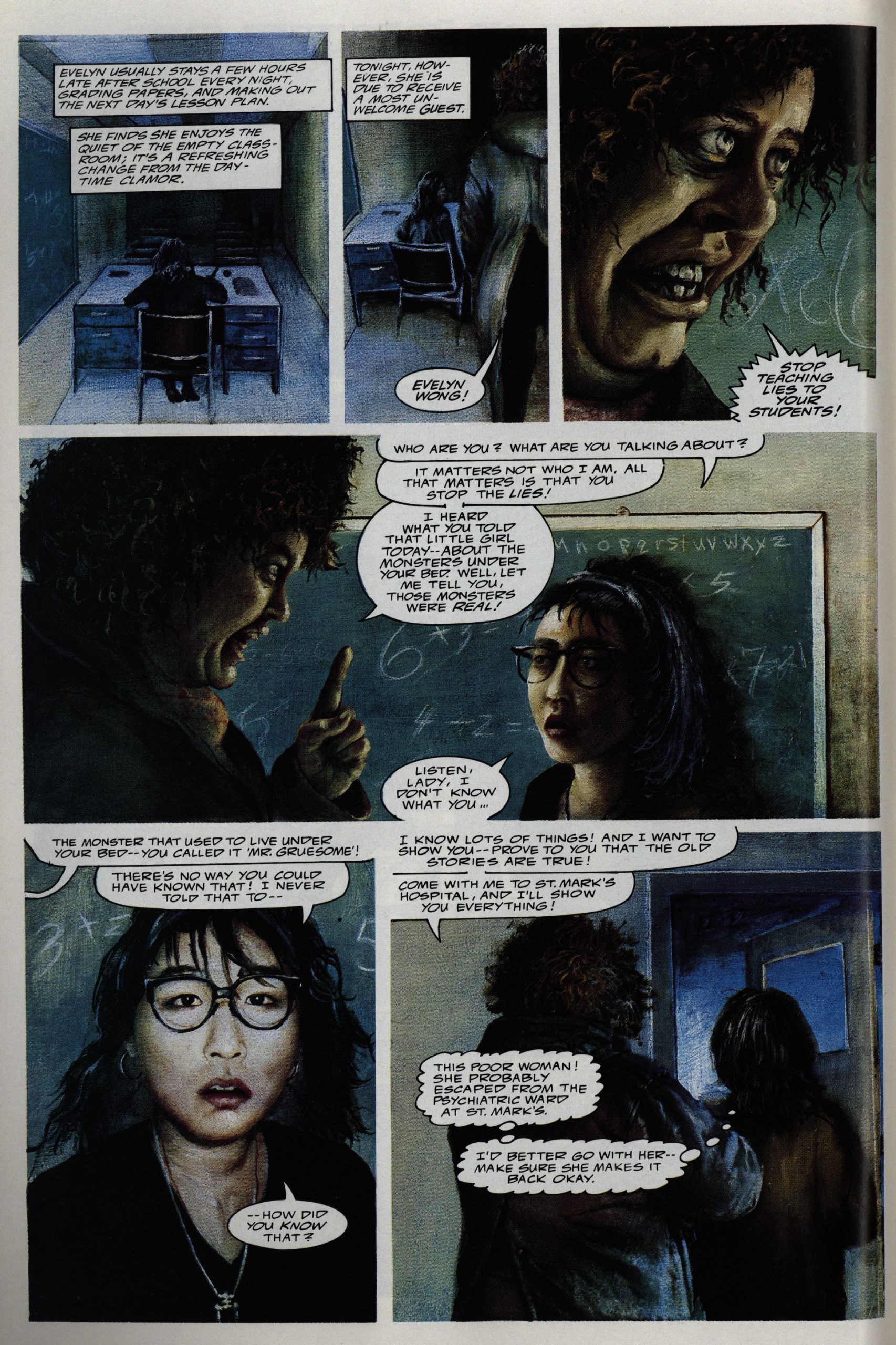 Steven Johnson’s artwork on this little thing is all kinds of wrong, but in the right way. 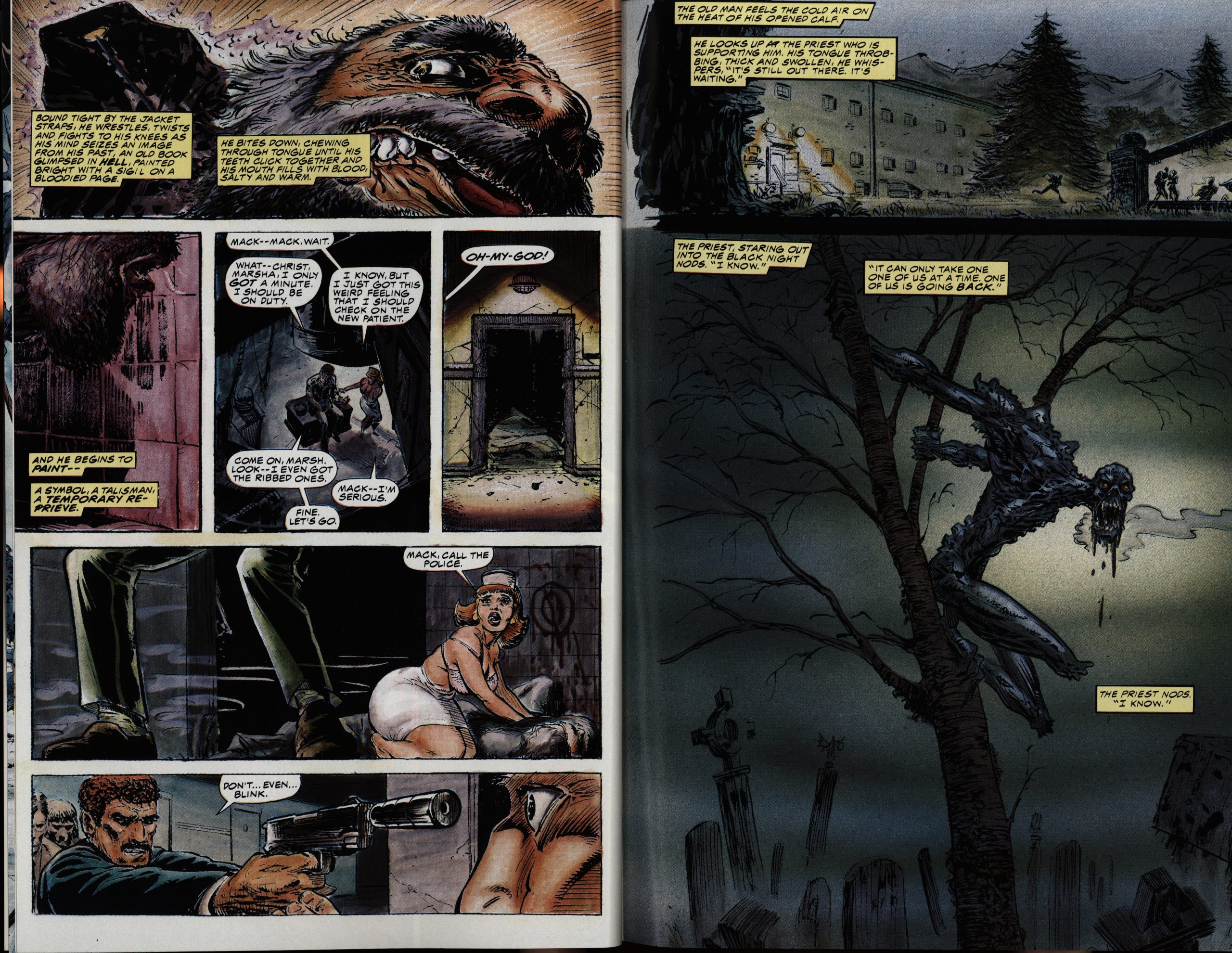 Finally we have the spring special, and it’s not an anthology, but a single story by Larry Wachowski and Mark Pacella. The standard Hellraiser plot had been worn out by now (well, it was worn out after Hellraiser II, really), so they instead pivot to the opposite obvious plot: People are mad and they’re not going to take it any more, so they’re on a mission to kill all the Cenobites and destroy hell. 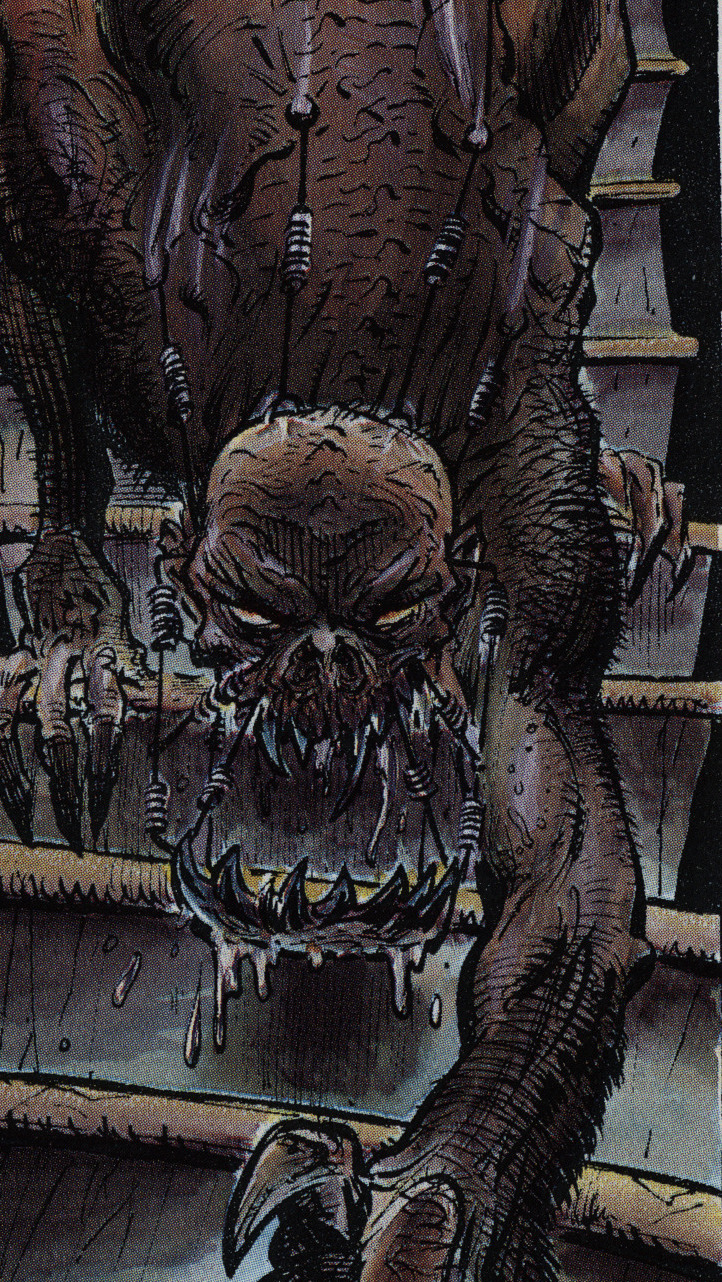 Well… that’s an innovative Cenobite, but where does the slobbering come from? 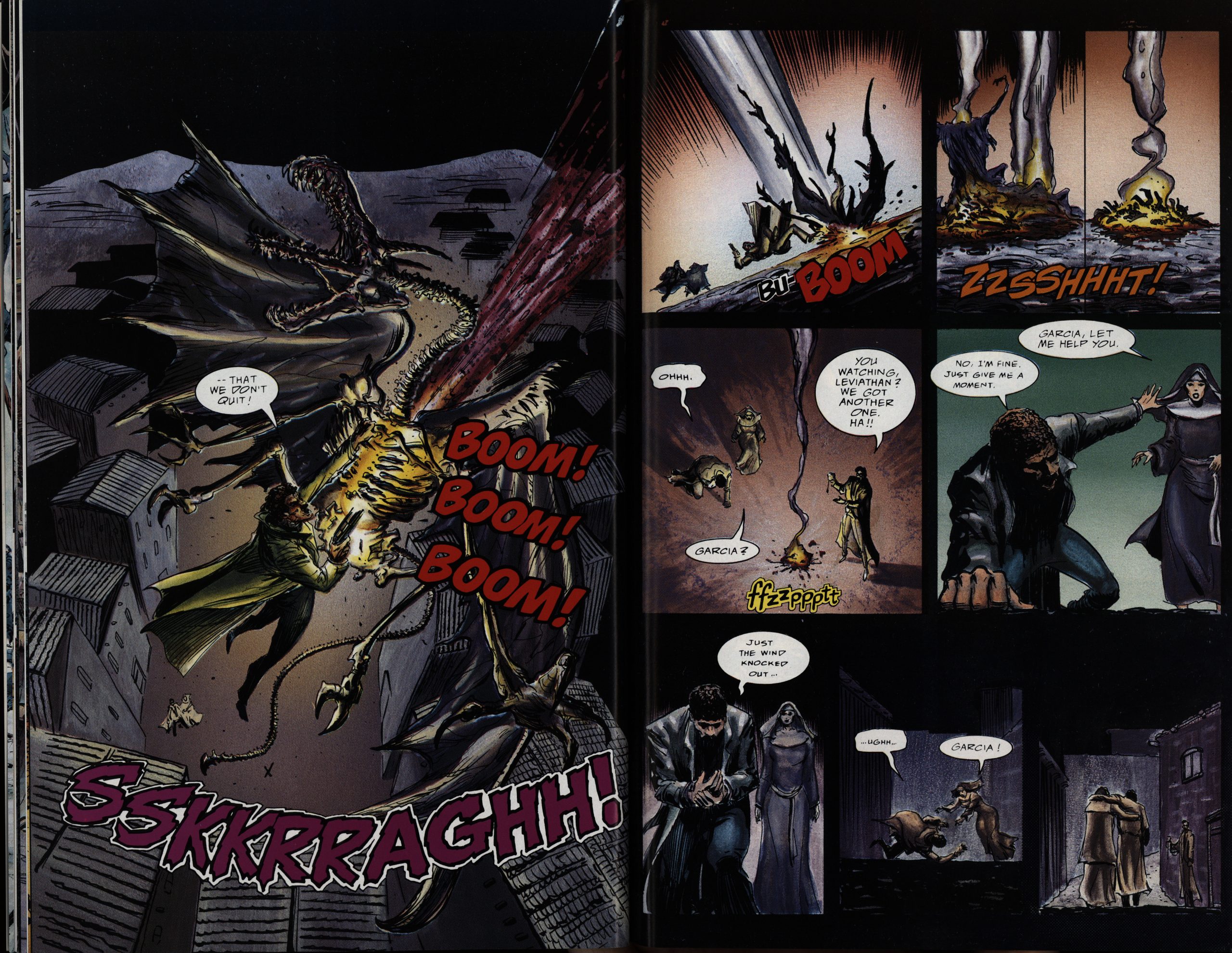 It turns out that Cenobites are really easy to kill. Who knew?! 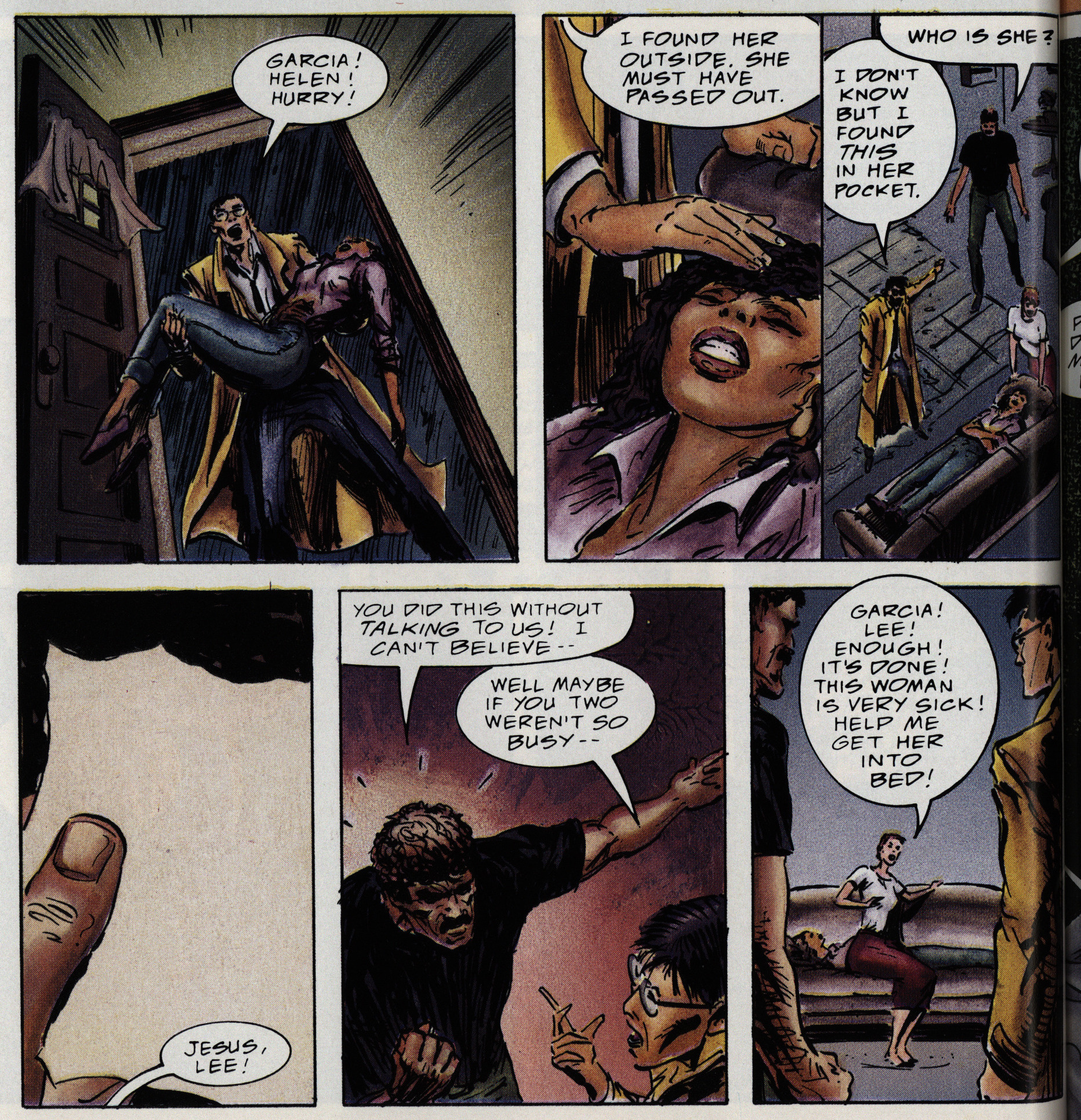 The story ends the only way it could.

The Christmas special acts like an anthology series with “A Christmas Puzzle” as the framing device, some of the cenobites from the original series told 3 tales of horror vaguely related to Christmas. “Child’s Play” was my least favourite, “Nursey Crime” had pretty good artwork and “Sheddin” was just strange. Overall it was a pretty bad volume.

The summer special didn’t seem to be received any better:

The stories are largely OK except they really don’t fit the concept of ‘what i did on my summer vacation’ which annoyed me greatly because it makes the whole feel disjointed and the wrap-around redundant – why not just have it stay as an anthology?

Oh, the same guy that ranted for hours about the Xmas special also rants about the Wachowski book.