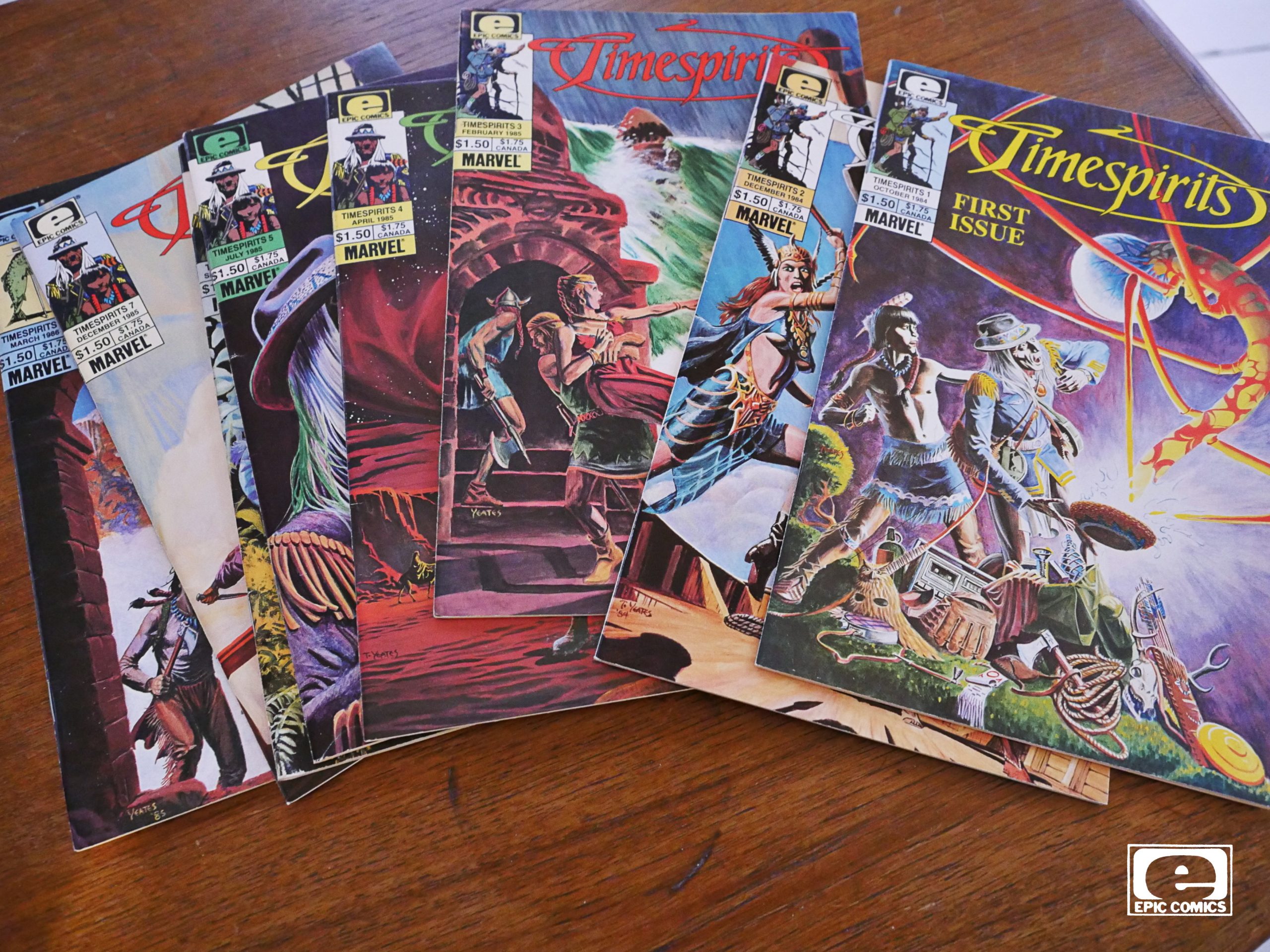 I haven’t read this series before, and my guess is that I didn’t buy it at the time because I was rather fed up with time travel stories? But I do love Tom Yeates’ artwork, so perhaps I just kinda like missed it.

Steve Perry’s name is familiar to me now, but reading his Wikipedia page, I think perhaps it’s just from reading the Kultz piece he did in Epic Illustrated?

Anyway, whatever is the case, I was not prepared for this book. Let’s just read the first three pages together: 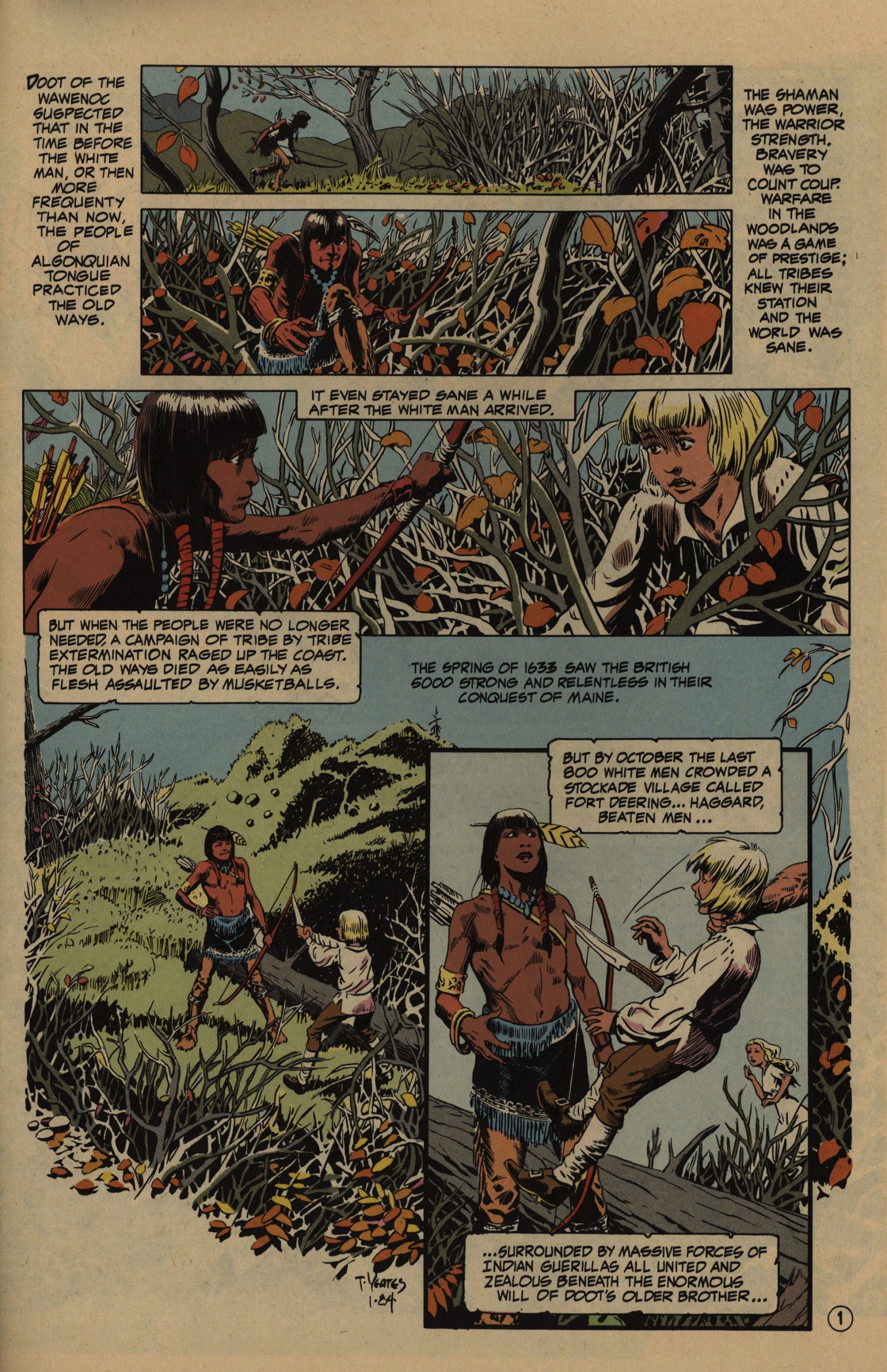 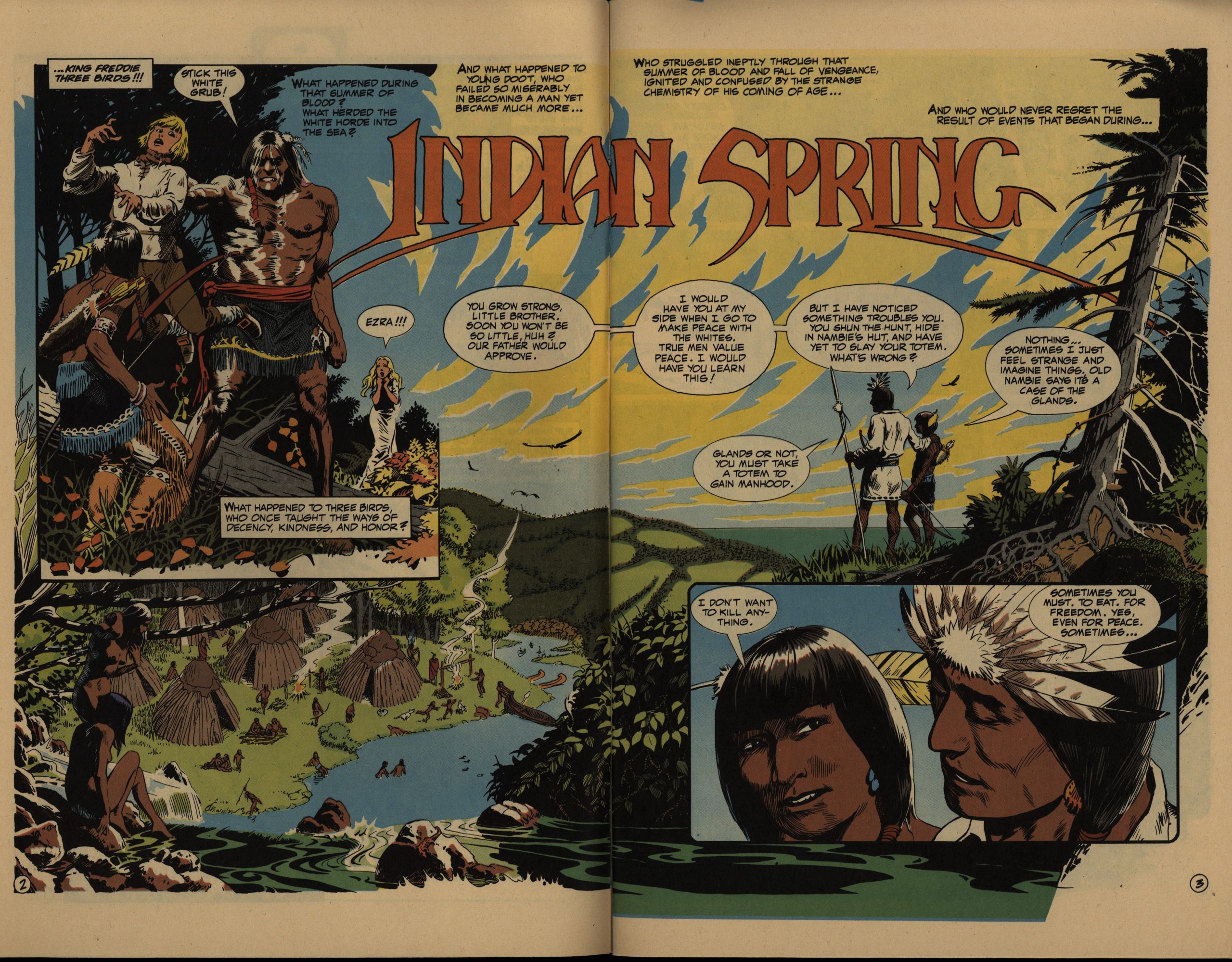 First of all: Gorgeous artwork from Yeates, with a strange flow of panels that still propels the story forward. But the story: It’s like wha. It’s told in such a … what’s a positive synonym for “vague”? It’s not digressive, but it has a way of progressing that’s fascinating. 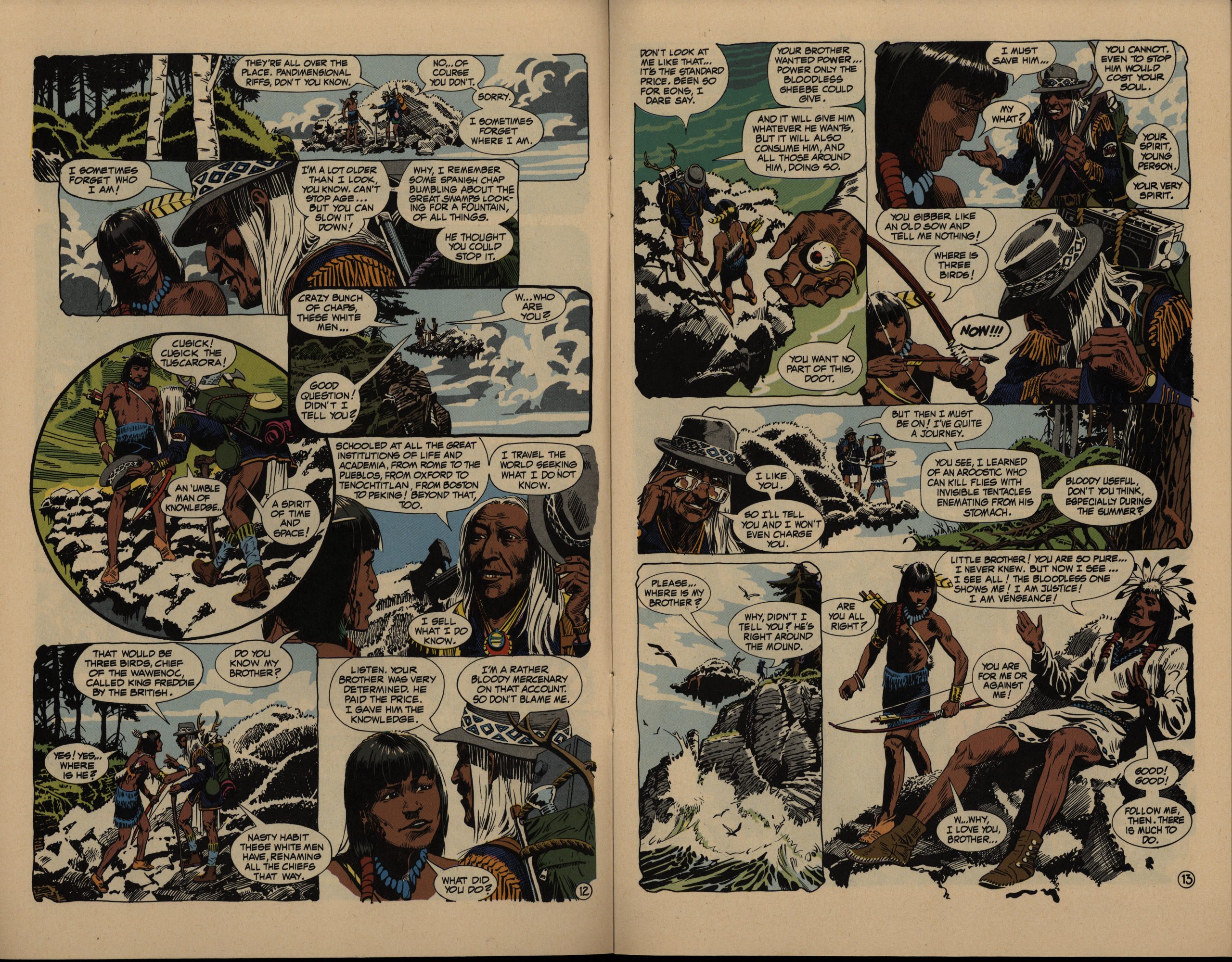 Looking at pages like this, you may feel that it looks like it has to be overwritten. But it’s not. The dialogues are interesting and seem natural. Perry doesn’t spell much out for the reader, but by having a natural teacher/pupil dynamic going, he can let us know a lot (and there’s a lot to know about this universe) without using captions or “as you know Bob”-ing us. 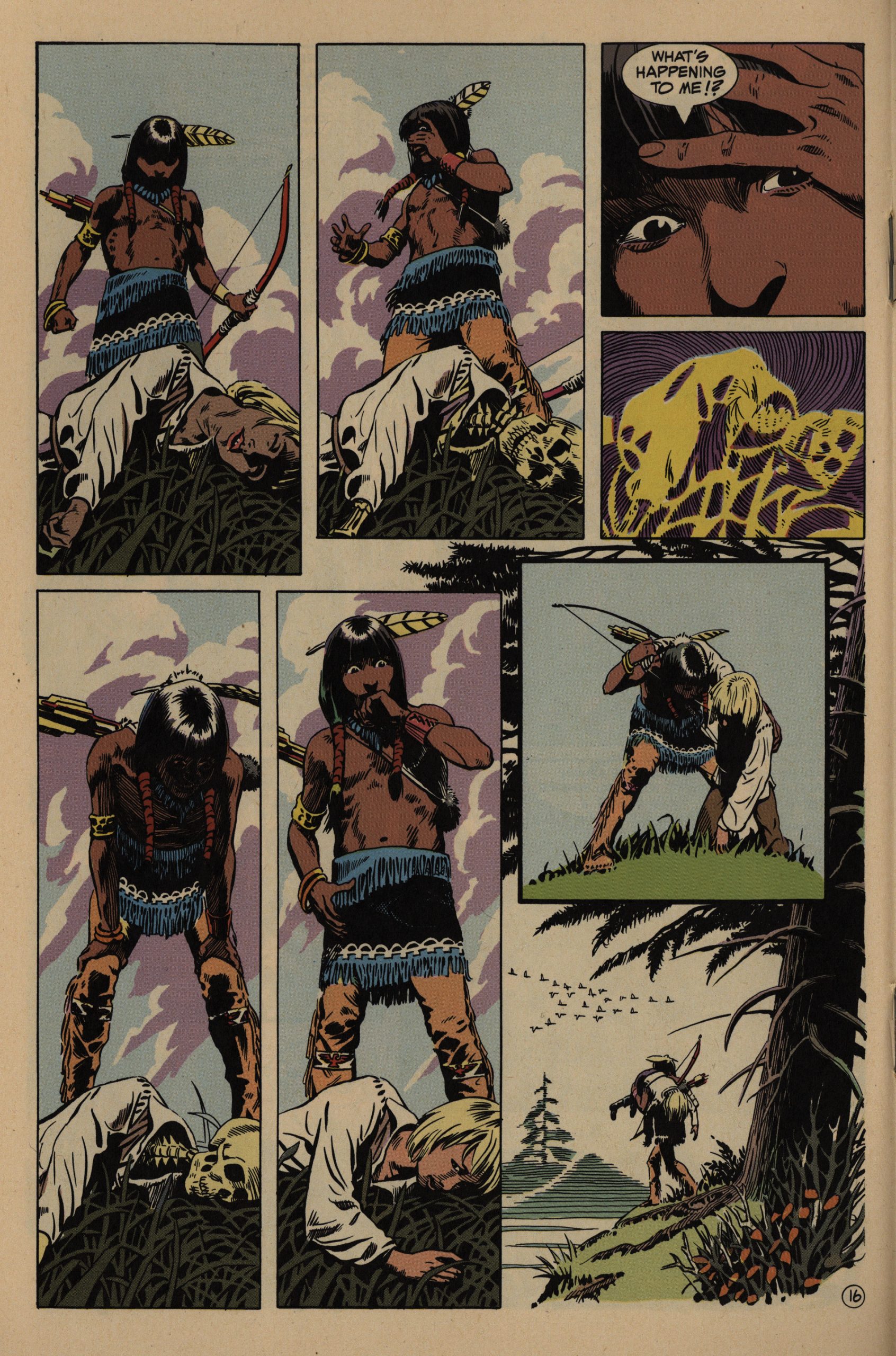 And he pulls back when no text is necessary.

I’m shocked at how well-made this comic is, and from the first page, I was totally onboard with it. 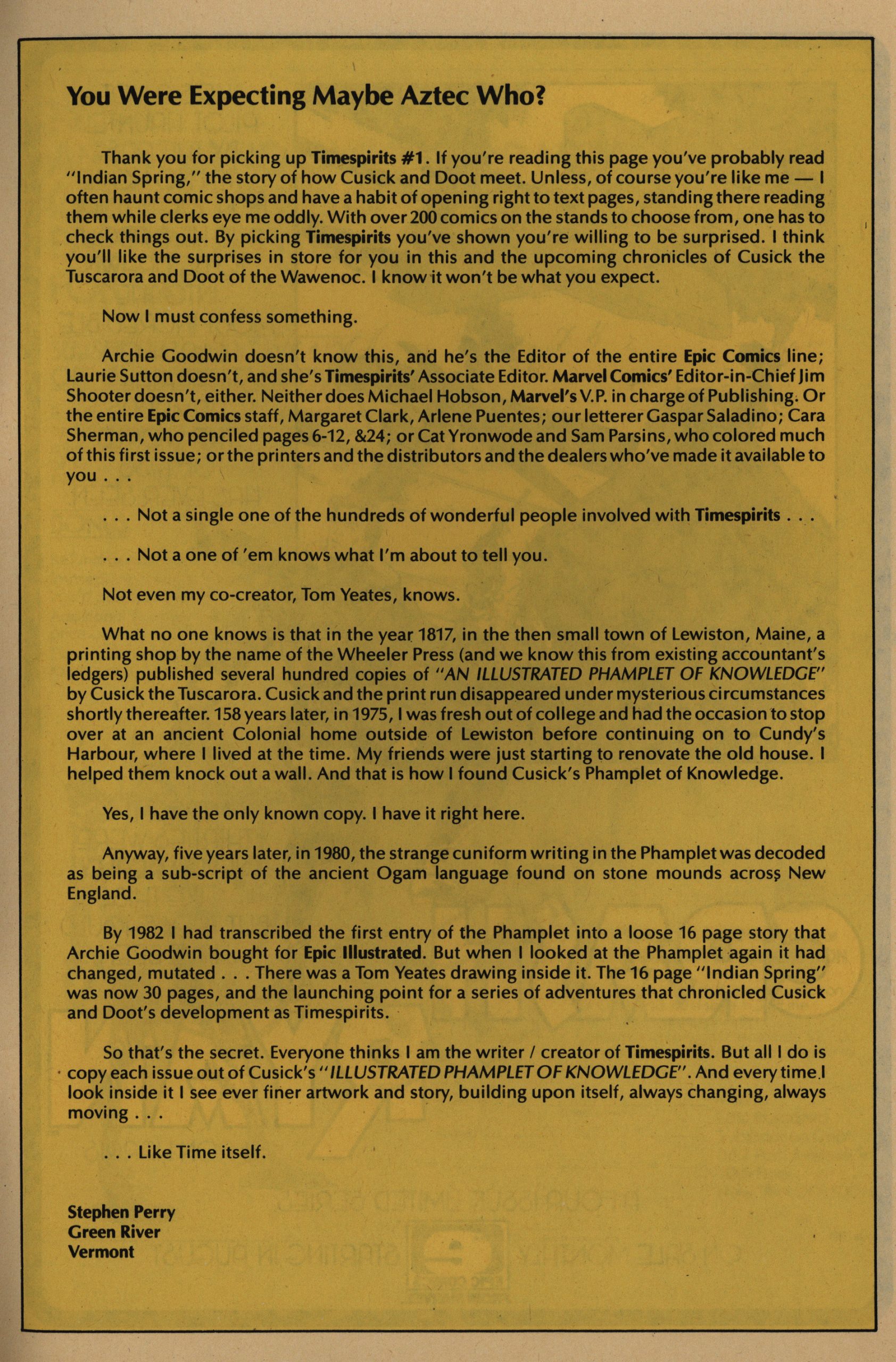 “Aztec Who?” Perry obliquely alludes to Aztec Ace, which was published at the same time (by Eclipse Comics), and is also about native Americans travelling through time. (I wrote about it here.) It’s a rather big coinkidink, isn’t it? And the books have similarities beyond that: They share some of the language and jokes and have some of the same allusive flow. 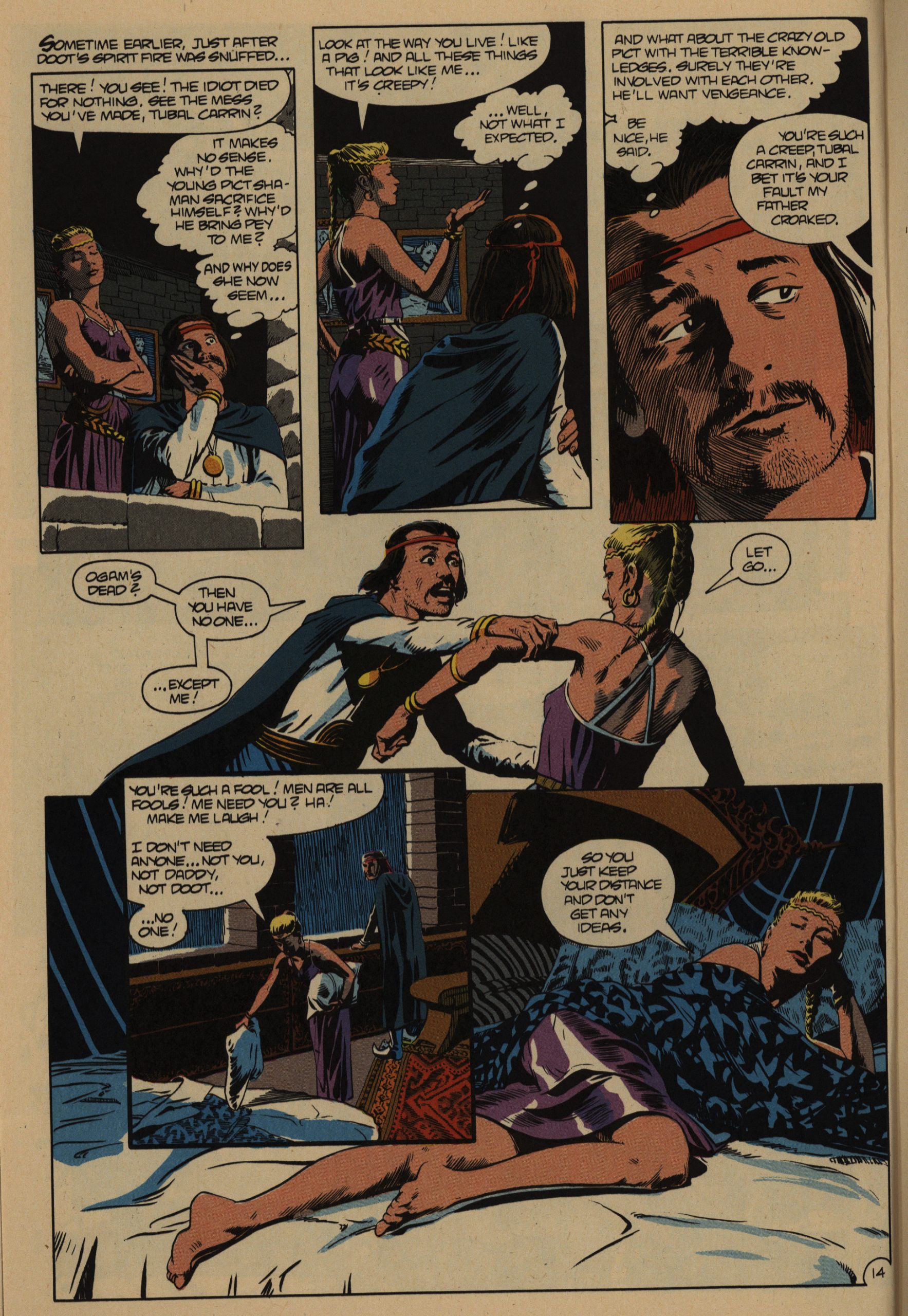 Still, they’re pretty different books, not at least because Yates’ artwork is different from Dan Day’s. It looks very photo reference based, doesn’t it? But if so, he’s got pretty good actors available. 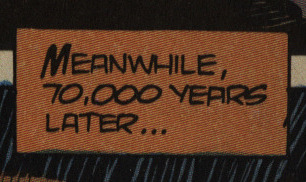 Ah, that’s a joke I think Aztec Ace did, too, but it’s impossible not to, right? 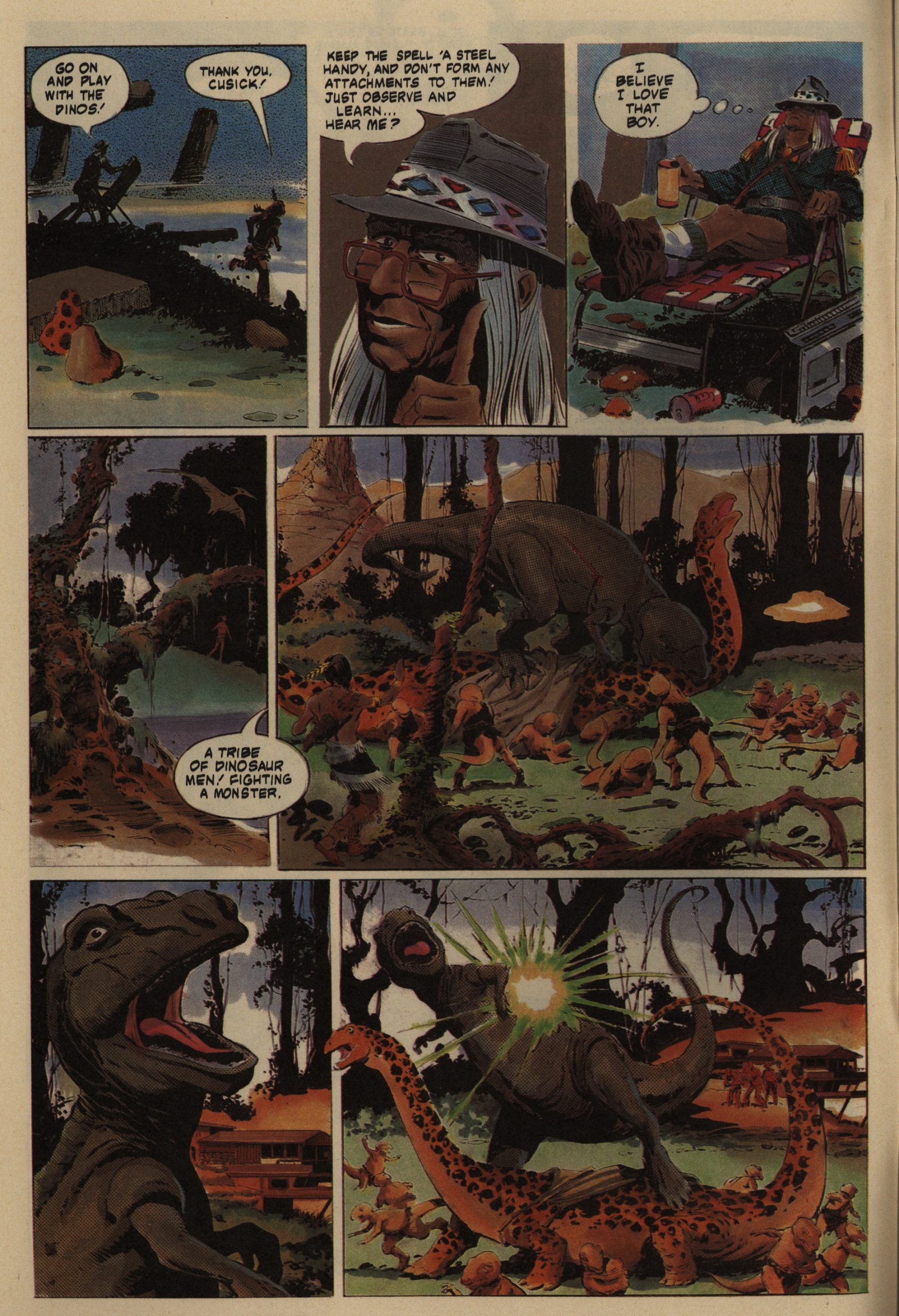 There’s no padding in these books, so Yeates had to do 30-32 pages per issue, which must have been taking its toll on a bi-monthly book. But we get one issue with fill-in artists doing one quarter of the issue each. First up is Al Williamson… 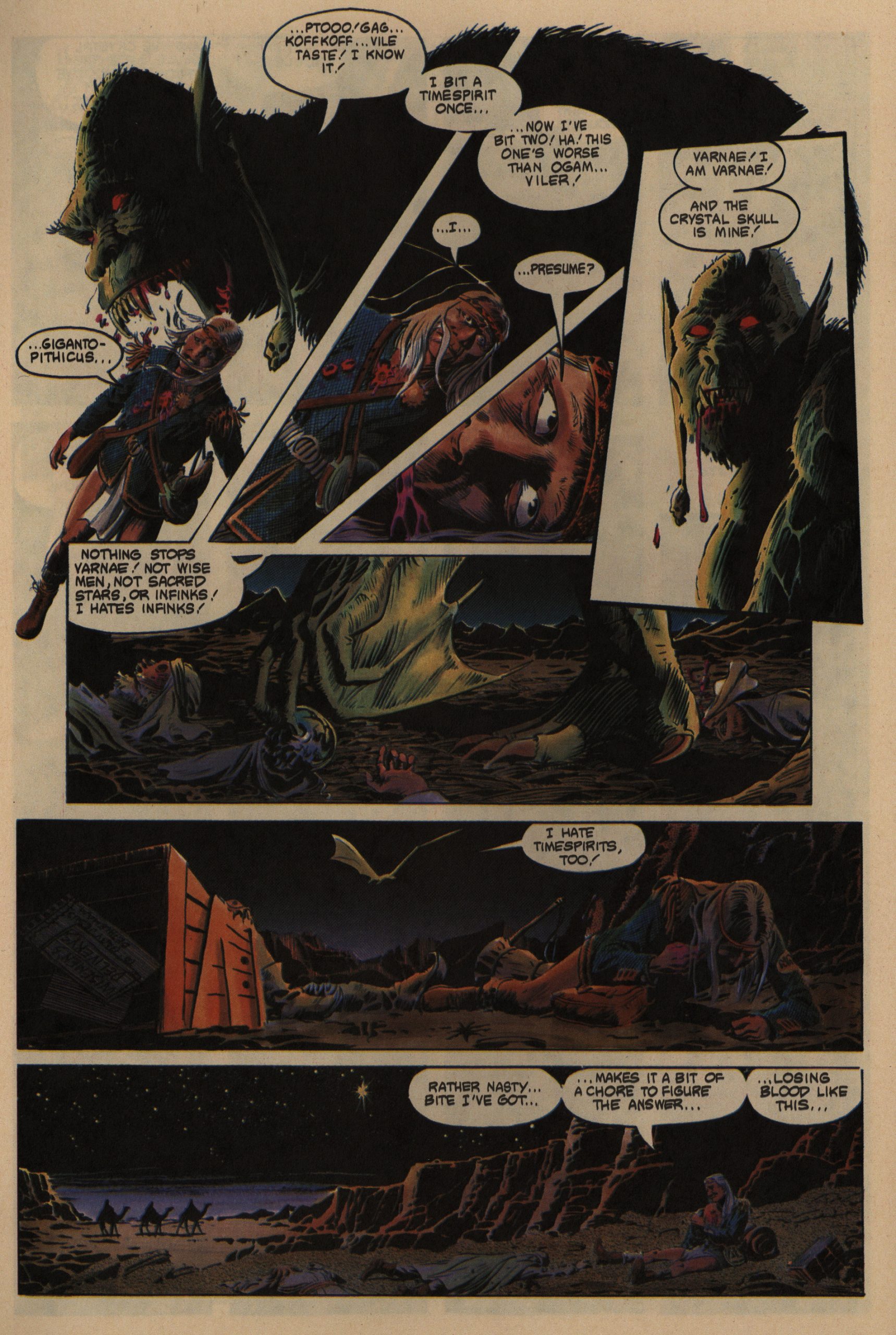 … then Steve Bissette and Yeates… 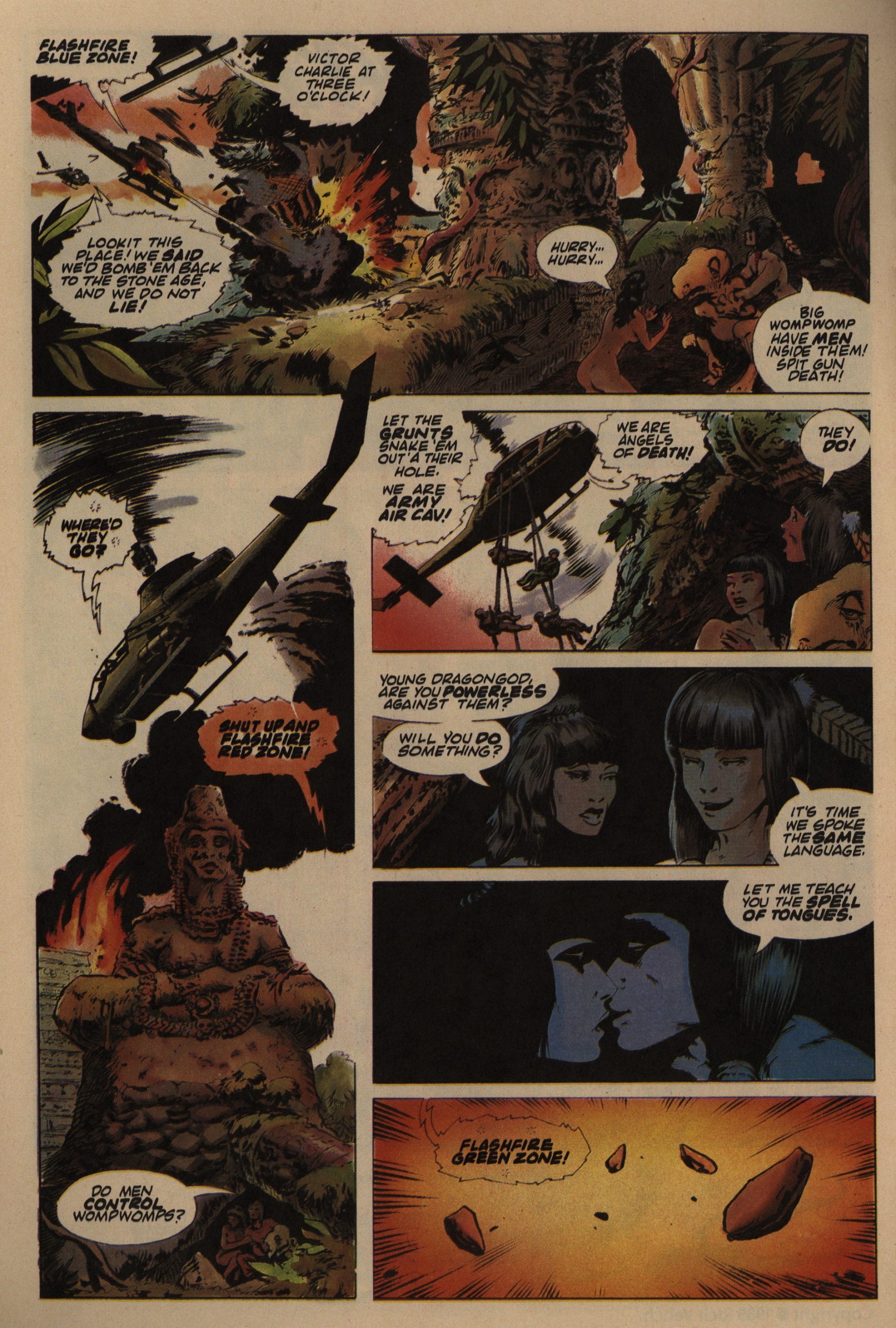 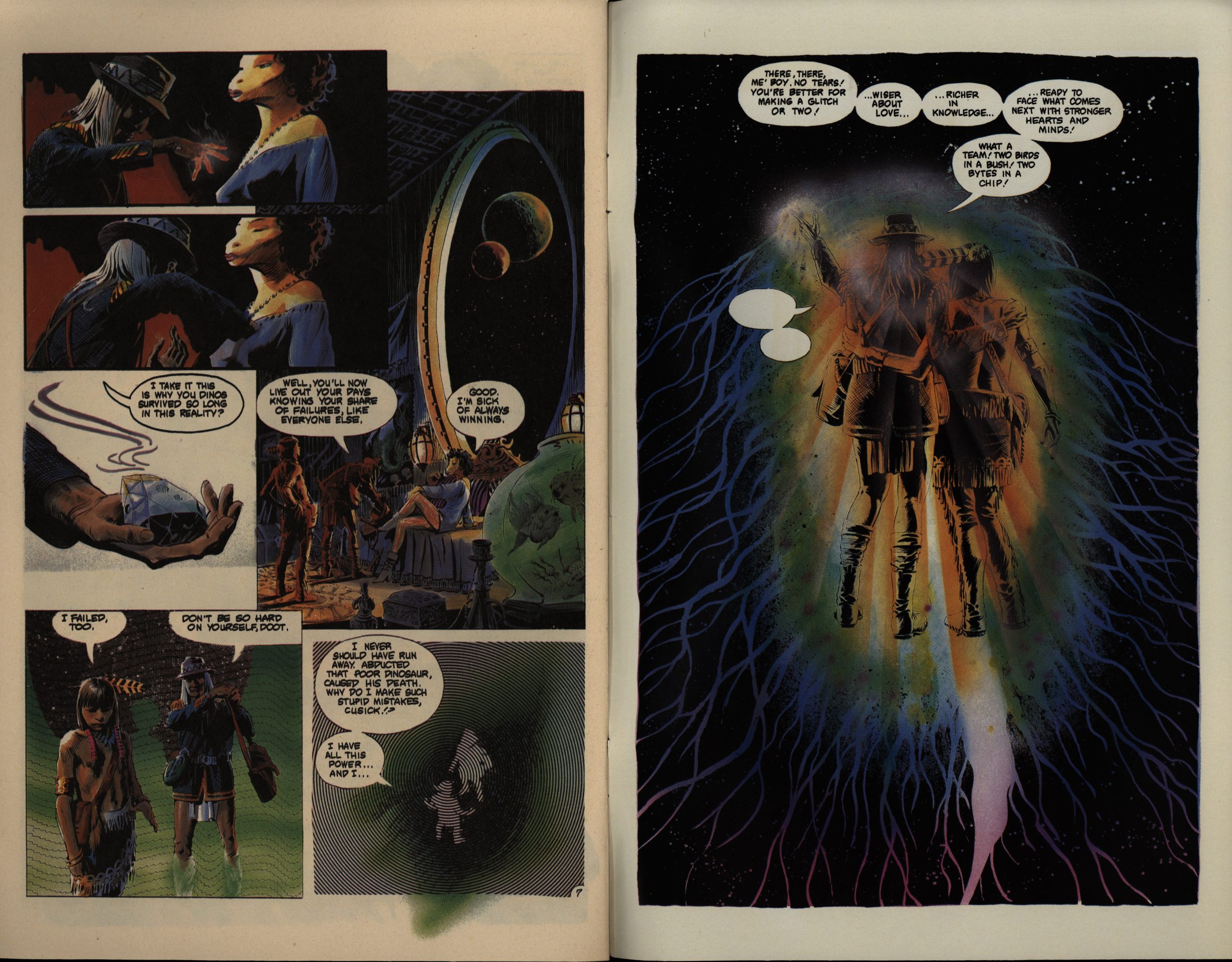 … and then John Totleben and Yeates. If I remember correctly, the latter four all went to the SVA around the same time? So I’d guess they’re friends anyway, and perhaps this issue didn’t end up like this because of scheduling, but because they wanted to work together? In any case, it’s amazing how well it works, and the issue is even fuller than usual, spilling out onto the inner back cover, too. Which is very unusual.

Also note that they switched from mechanical colour separations to “full colour” this issue. Epic was experimenting with it across several titles at the time, with varying degrees of success, and it’s rather muddy here. 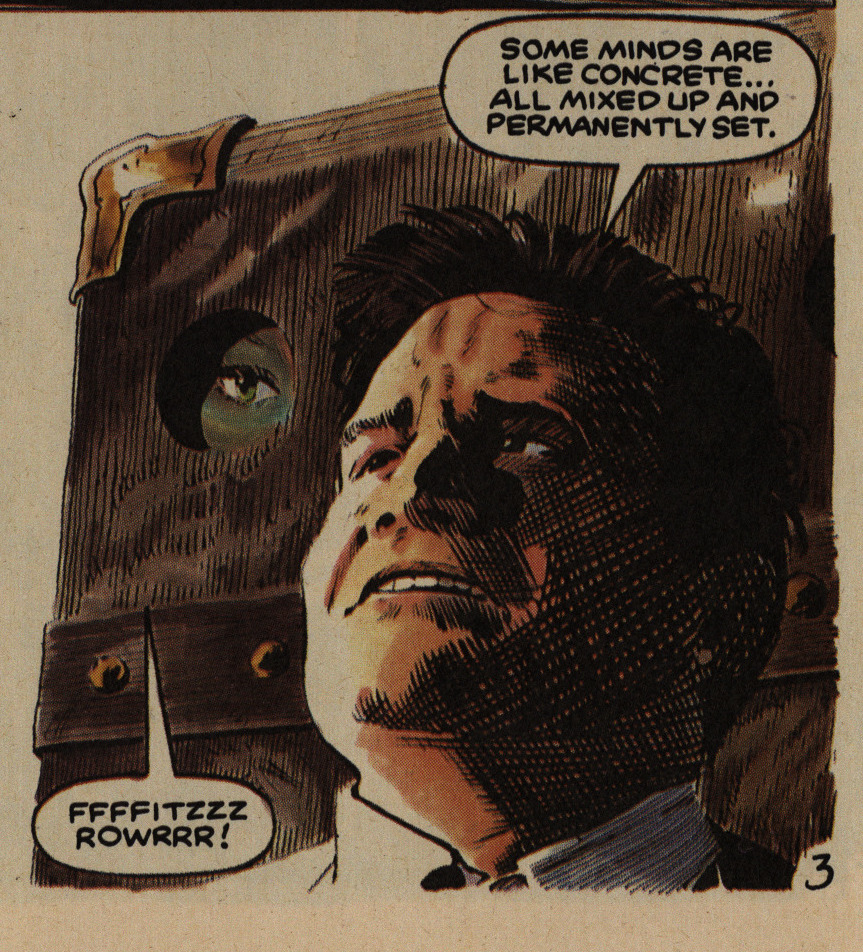 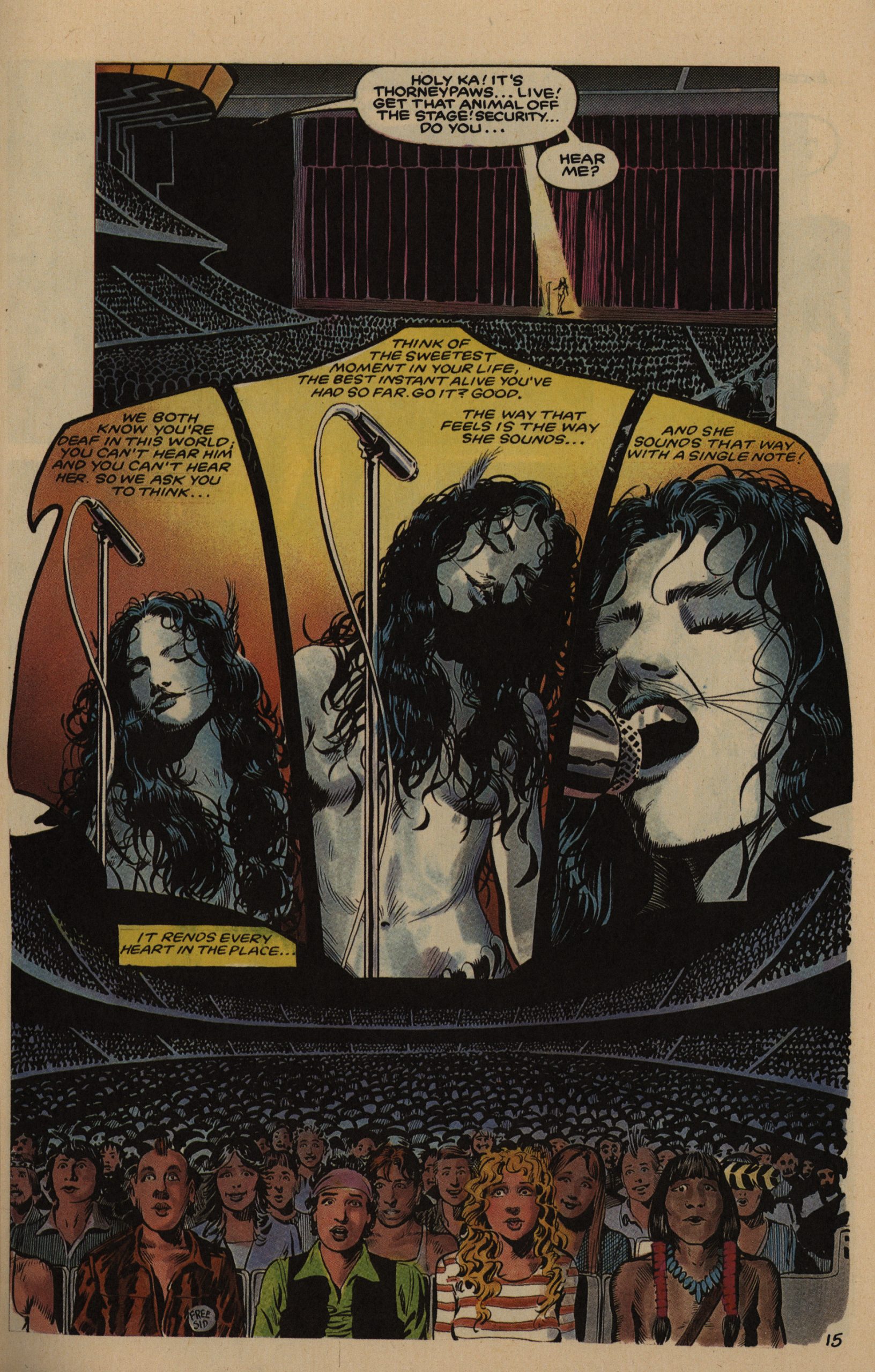 Gotta do some fourth wall stuff, too. It’s the law. 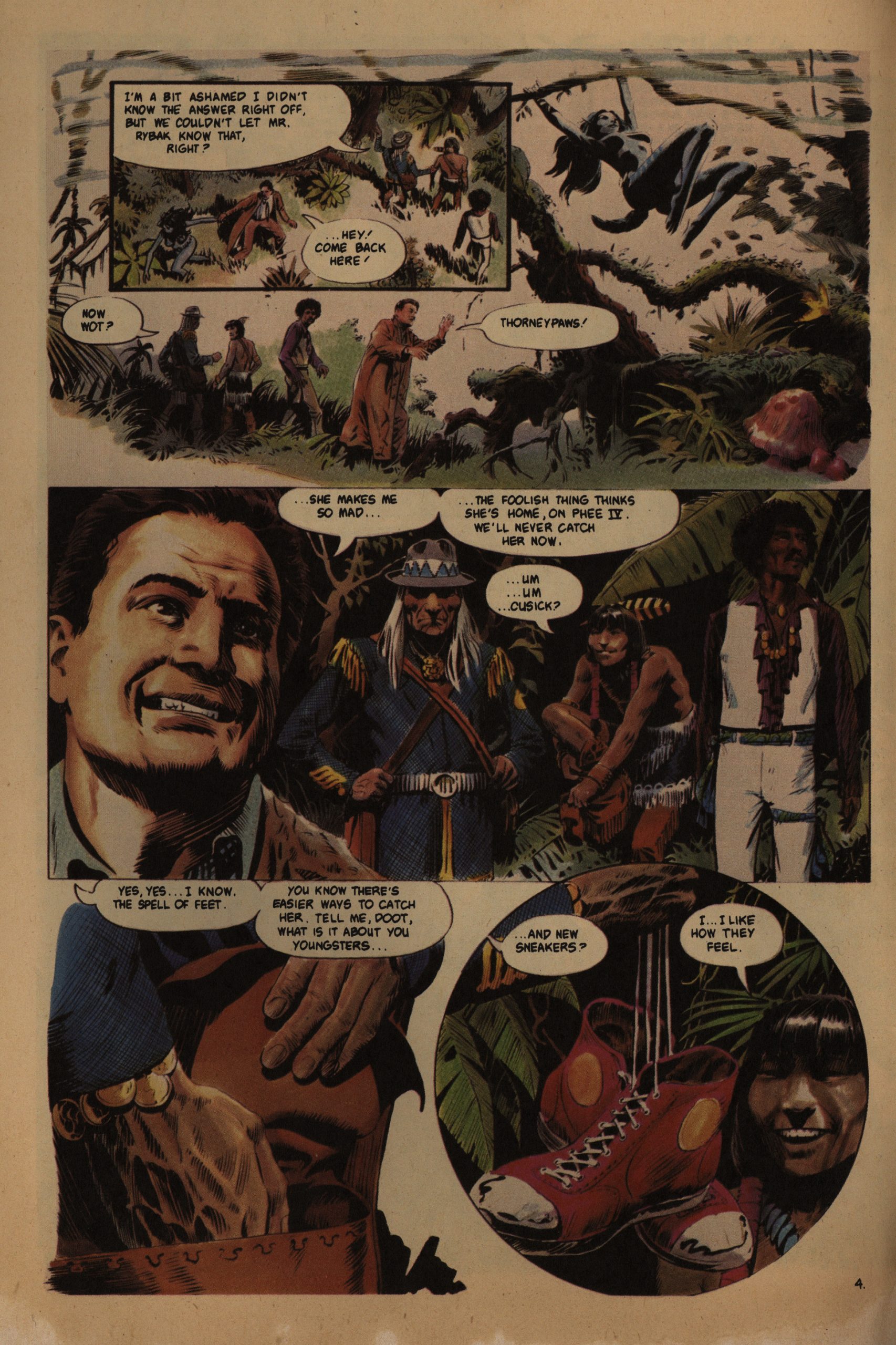 Steve Oliff does the colours for the remaining issues. It’s good, but… I think it kinda overpowers Yeates’ fabulous linework here and there?

Many people seem to think that Avatar ripped off the concept of blue naked jungle women from this comic, and I guess that’s possible. But on the other hand, it does seem like a pretty obvious thing to do? Right?

Then, for two issues, Timespirits goes all political on us. Here we have a scene of CIA-supported death squads doing their thing in Central America. My guess when reading this was that Yeates had taken over writing the book: In the indicia, he’s not listed as “artist / co-creator” in this issue, but just “co-creator”, and this reads very much like a Yeates sequence. I mean, it’s good and he’s correct, of course, but it’s a rather abrupt change from what’s been going on before in the series. 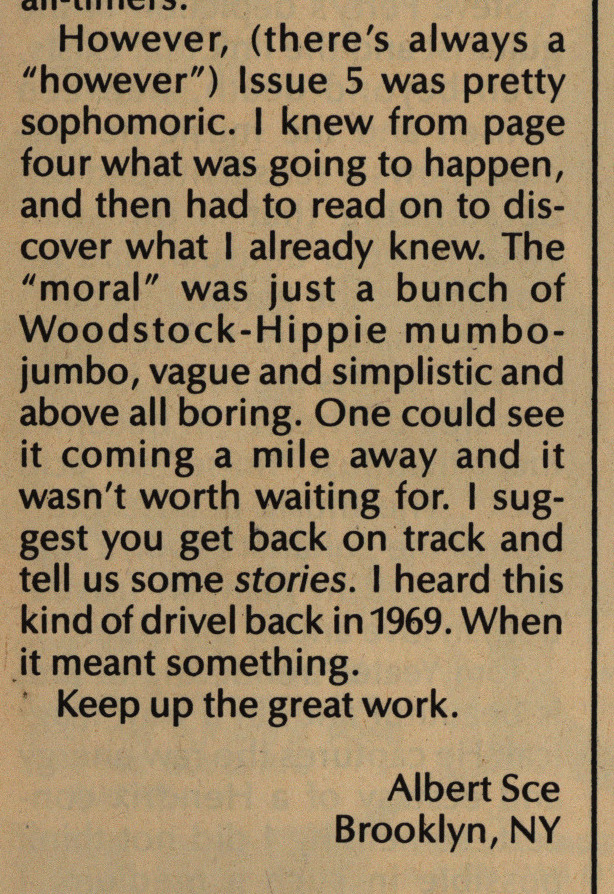 What? Moench and Gulacy? 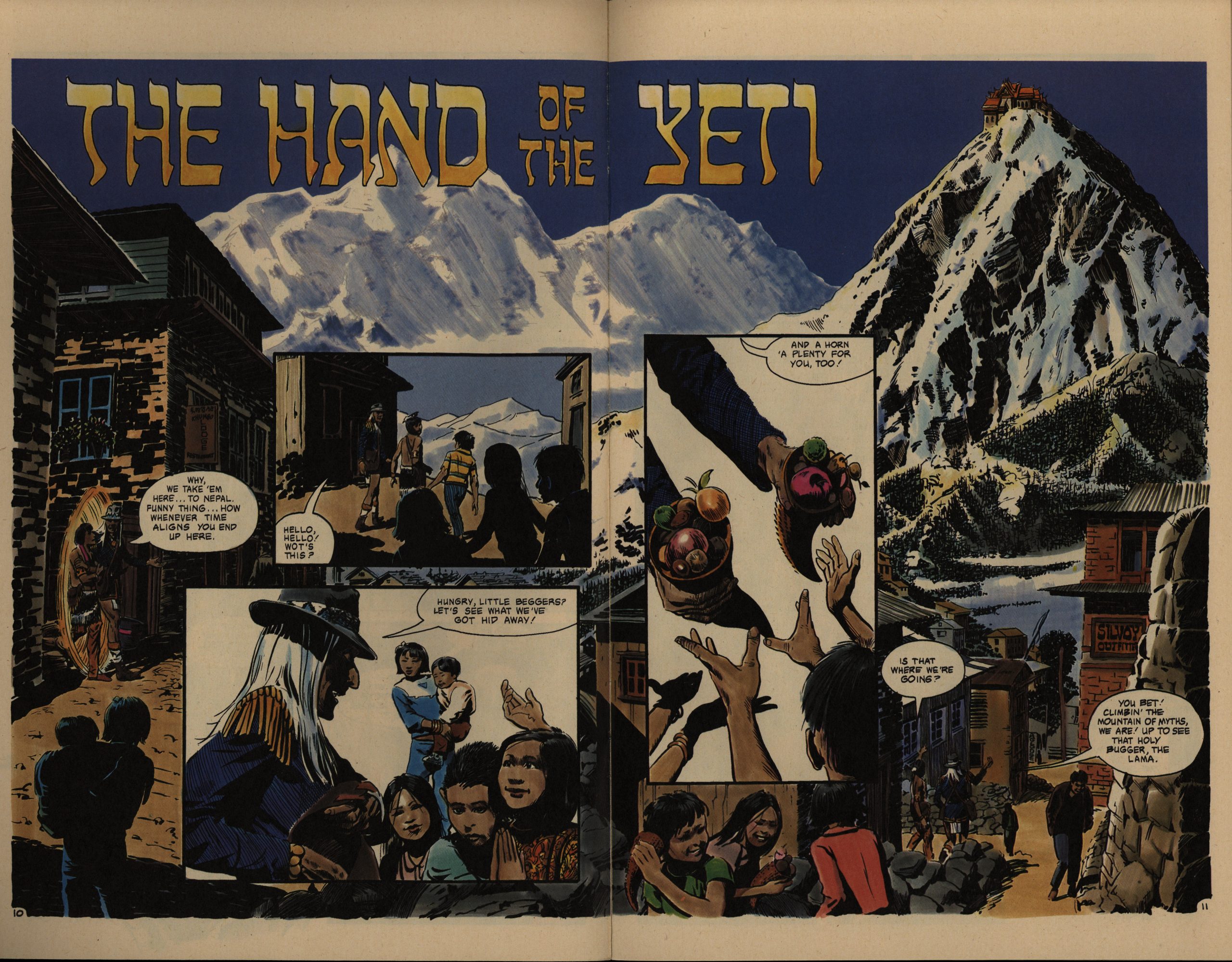 That does not look like Gulacy. I think somebody messed up a bit. 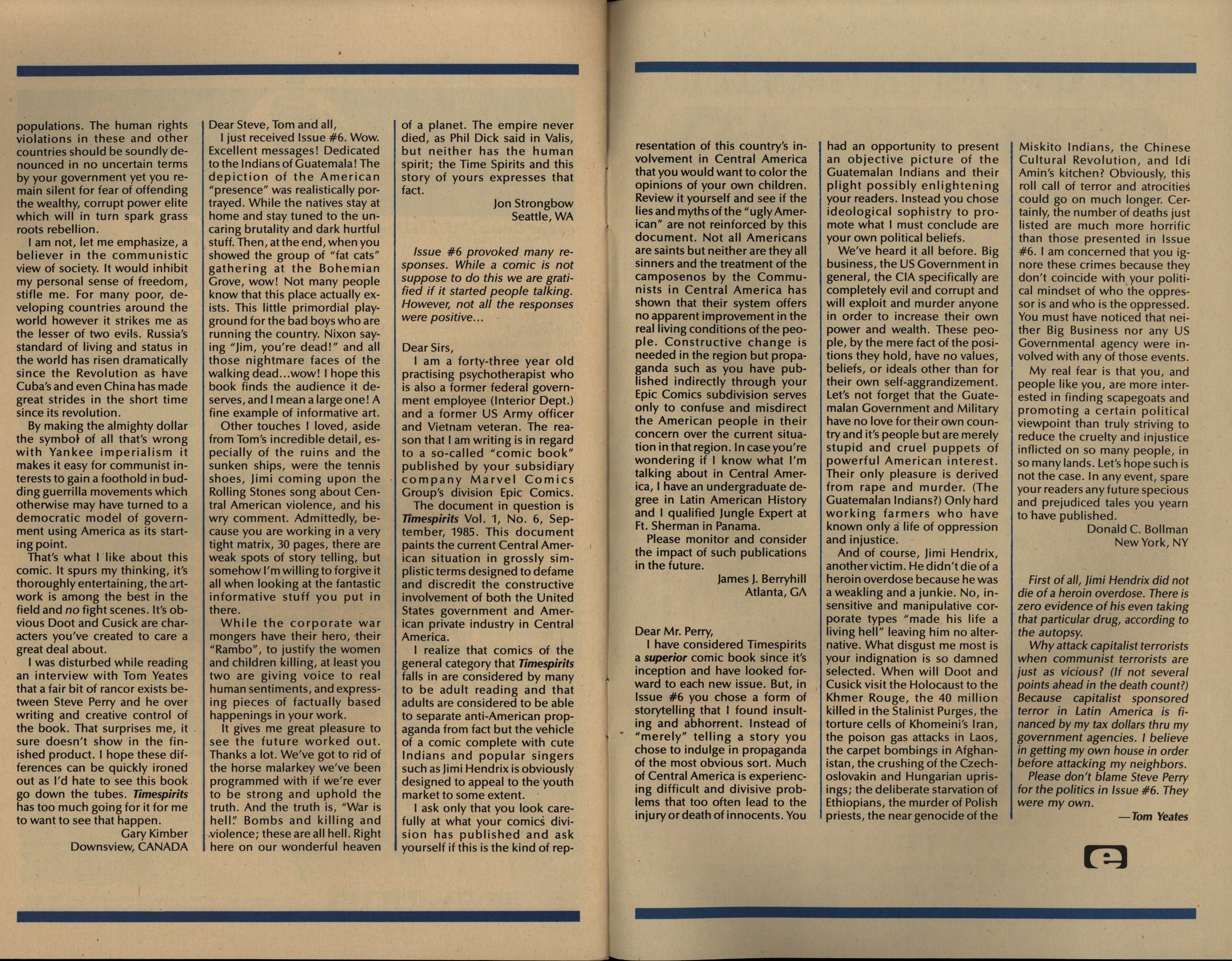 Wow, that’s quite a barrage against the CIA storyline. “A so-called ‘comic book'” and what about the Khmer Rouge huh? Huh? HUH?! 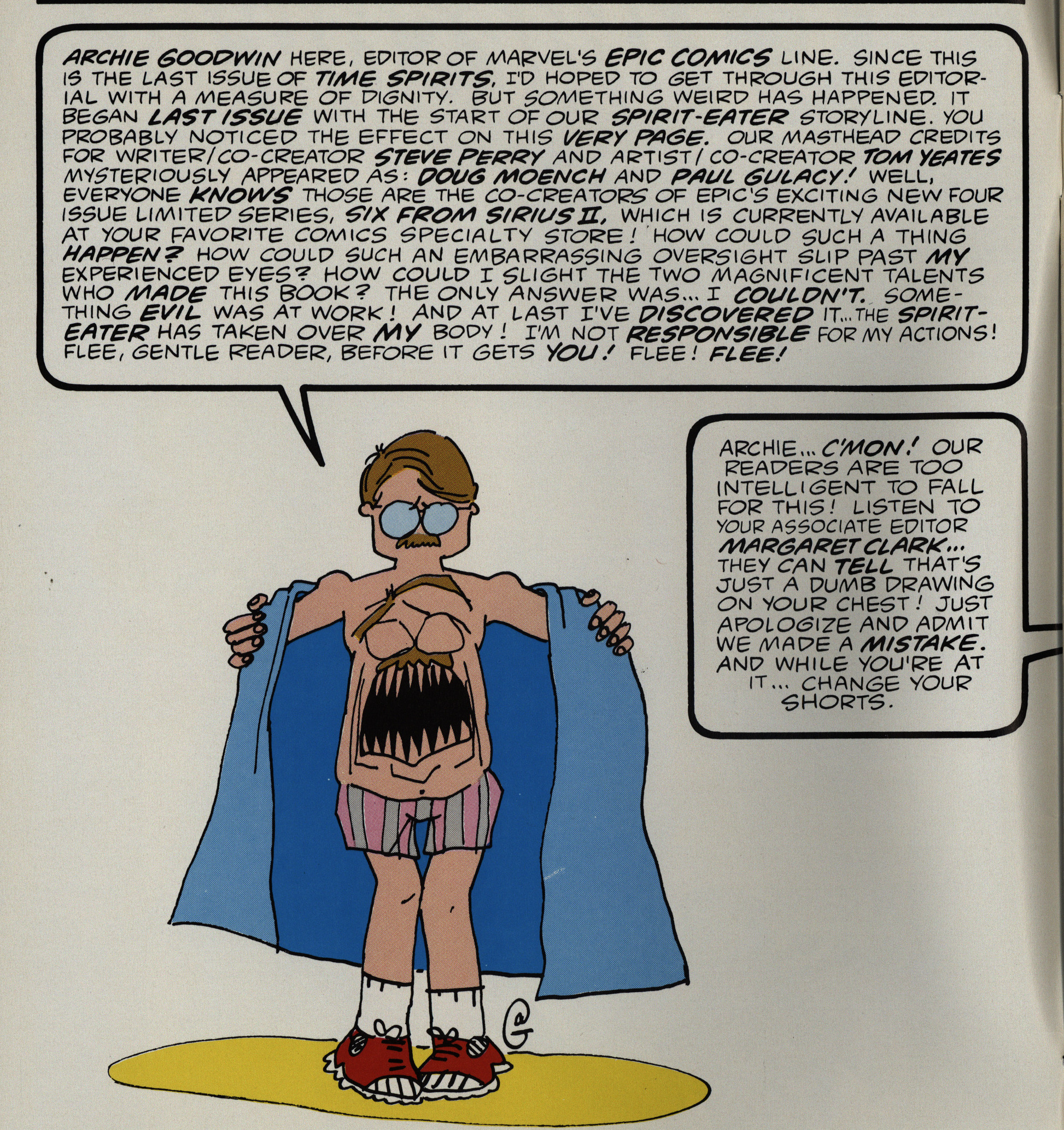 “Since this is the last issue”… That’s all the announcement of the series ending we’re getting. As final issues go, it’s really inspired and full of insane concepts. I mean, look at that teeth-filled hand. Just look at it. And then the characters take their bows and it’s over. That’s a classy way to end a comic book, even though it was a rather… sad ending.

This book has never been reprinted, which I think is a shame. It’s gorgeous, it’s fun, and it’s a really good, interesting read.

From the summer of 1984 to spring of 1986, Steve collaborated with artist Tom Yeates on the 8-issue fantasy series Timespirits for Archie Goodwin’s Epic Comics line at Marvel. It was initially a fruitful collaboration, yielding a comicbook series still celebrated by its readers and fans, and which some argue provided inspiration for elements of the recent James Cameron blockbuster hit Avatar (2009), specifically the blue tribal people of Timespirits #6 (September 1985). Alas, differences between the creators, including disagreements concerning what direction the series should go (specifically, disagreements concerning overt political content being folded into the series), resulted in an unhappy conclusion to the series and its early termination.

Bissette doesn’t say who was on what side of the disagreement, but Yeates owned up to writing the CIA storyline on the letters page, so I surmise that Perry wanted to keep it more apolitical.

But what did the press have to say about the book?

Don’t ask me what alimespirit is,
because, frankly, I don’t really
know at this time. Vlhat’s more,
I’m not sure ! care to find out.
I am totally unfamiliar with
scripter Steve Perry, but judging
from this story he is not without
talent. It is well written in both
dialogue and captions, but ulti-
mately it leaves you unfulfilled, as if
some important ingredient was
missing. You can’t pinpoint it ex-
actly; you just know it doesn’t taste
quite right.
I realize that is not a very con-
crete criticism, but it is hard to tell
where this story goes awry. It never
really grabs you and pulls you
within it. We learn little of Doot,
save that he is a good and loyal
boy. The other main character,
Cusick, comes across as cold.
blooded and empty. You are left
with no strong desire to follow the
path these two will take.

RA Jones is wrong, as usual…

An unusual dispute has arisen
between the writer and artist of
Timespirits. When artist Tom
Yeates wanted to rewrite Steve
Perry’s script for issue #6, he got
plot approval from the Epic
comics editorial department, and
permission from Perry. The
disagreement stemmed from the
rewrite that Yeates’s script
underwent after he had completed
the entire story. Both Epic Editor
Archie Goodwin and Perry deny
that Yeates was given as much
creative leeway to rewrite the
story as he took.
Second of two parts: Timespirits
was the conclusion to the
story begun in issue #5, where
the two protagonists, Doot and
Cusick, confront American
governmental and corporate inter-
vention in Central America.
Yeates told the Journal that he
received the finished script for
issue #6, and wasn’t fond of it. “I
just didn’t think the story was
very good. and since I put a lot
of time into my work, I didn’t
want to draw it the way it was,”
he said. “l suggested to Steve that
he might want to work on it, but
he refused to.
“l told him that it had to be
changed or I wouldn’t draw it,
and he told me to go ahead and
work on the script,” Yeates said.
Armed With What he said he was
a “carte blanche•• from Perry,
(with the caveat that the plotlines
were tied together). Yeates
proceeded to create a heavily
political story, involving actual
government figures such as
President Ronald Reagan, former
President Richard Nixon, and
Secretary ‘of State George Schultz,
among others. Yeates’s story was
heavily political. and amounted to
an indictment Of current U.S.
policy in Central America.
Yeates felt strongly enough
about the message he was trying
to get across in the book that he
paid $50 out of his own pocket to
take out an advertisement in
Comics Journal

What a fucking mess.

QUESTION: What is the correct course of
action for a comic book artist when he receives
a script that he doesn’t like?
ANSWER: Bend over and do the job like a
good prostitute.
Received a copy of the Comics Journal with
the news article on Timespirits The article
was interesting, but much of the particulars
were yrong. Too bad your policy won’t let the
people you’ve written an article about proof-
read the piece before you print it. I wish you
could have just run the key pages from my ver-
Sion so people could judge for themselves
which works better, instead of focusing on
behind the scene arguments. Such as.. .40
cent of my version of Timespirits remained
exactly as Perry wrote it in the first place, and
it was never my idea to remove his name from
the credits. Also, while there are a number of
“motherfuckers” portrayed in the story,
nowhere did I ever use that word.
The correct medium for making a political
statement is whatever medium you have. To
protect the business interests of its leaders in
1954 the C.I.A. destroyed a very constructive
democracy in Guatemala. The facts about the
successive military dictatorships are too sicken-
ing to relate. But they’ve made Guatemala
miserable for over 30 years with the enthusi-
astic support of right wing America.. The most
victimized people in Guatemala are the
Indians. When Steve Perry sent the Timespirits
(also Indians) to Central America it seemed
only logical for them to side with the local
natives. At least I thought so.

I think somebody should print a collected edition of Timespirits.